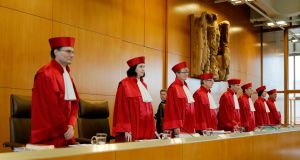 The case is being heard in the country’s highest court and plaintiffs include lobby group Reporters Without Borders. Photograph: EPA/Ronal Wittek

Germany’s foreign intelligence service is in the dock in the country’s highest court in an unprecedented legal challenge to its surveillance of communication abroad.

The subsequent outrage in Germany was muted somewhat at news of close NSA co-operation with Germany’s foreign intelligence, the Bundesnachrichtendienst (BND). Later it emerged that the BND used skills and technology acquired from its NSA work for its own operations.

This case focuses on a revised 2017 surveillance law which formalised and expanded BND powers to collect and analyse all foreign communications. A key proviso is that the BND filter out and delete all communications involving German citizens.

The plaintiffs in the case, including lobby group Reporters Without Borders, say the law allows the BND spy on German journalists without due cause if they make phone calls with foreign colleagues or sources.

Three years ago a leaked BND contacts list suggested the agency had among its surveillance targets at least 50 foreign journalists.

Prof Matthias Bäcker, for the plaintiff, quoted a BND employee who told a parliamentary inquiry that the law “made it open season on communications of foreigners abroad”.

BND critics claim there is now no effective parliamentary or political oversight of German intelligence – a serious charge in a country where history has made people wary of over-zealous security services.

Dr Joachim Wieland, for the German federal government, argued the case was inadmissible because people abroad did not enjoy the same fundamental rights as German citizens in Germany.

This prompted one judge to ask if the principle of human dignity, anchored in the first paragraph of the post-war German constitution, is not applicable to non-German citizens elsewhere in the world.

Among the plaintiffs is a German lawyer based in Guatemala, who sees his rights – and those of his clients – infringed by the 2017 law.

The case puts the BND in any intelligence service’s least favourite place – the spotlight – and has forced it to explain its methods and motives to the red-robed constitutional court judges.

“We are not a security or criminal investigation agency, we are an intelligence service,” said Bruno Kahl, BND president. His agency concentrates on collecting and analysing information based on criteria supplied by the federal government.

The agency intercepts up to about 154,000 communications a day, the BND told the court, of which about 260 are sorted manually as relevant for intelligence.

When it comes to intercepting journalist communications, the BND said it analyses first whether the communication is private or professional. If the latter, it weighs up whether the informational gain is enough to retain the data at the cost of privacy.

An analysis for a Gemran Bundestag investigation found that BND filters in cases like this showed “considerable, systemic deficits”.

After a second day of hearings on Wednesday, a ruling is expected in the coming months.