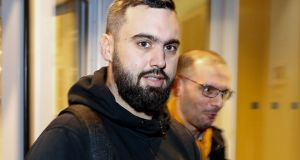 Police in France have detained one of the leaders of the gilets jaunes anti-government movement for organising an unauthorised protest, as authorities adopt a tougher approach to try to curb demonstrations by the movement.

The arrested man, Eric Drouet, a lorry driver, already faces trial in June for “carrying a prohibited category-D weapon”, after he was allegedly found with a wooden stick at a previous protest.

Since November 17th, the gilets jaunes – or “yellow vests”, named after their fluorescent jackets – have regularly held demonstrations that were not declared to the authorities.

For several weekends, gilets jaunes demonstrations in Paris and other cities such as Toulouse and Bordeaux saw violent skirmishes with police, as well as banks and shops smashed up and cars burned.

Mr Drouet was arrested by police in Paris on Wednesday night as he was heading towards the Champs-Élysées, where several demonstrators had been waiting for him.

They said they intended only to light candles for the people injured in demonstrations or killed in road accidents during the six weeks of protests, which took place on roads and roundabouts and began as a fuel-tax revolt but morphed into a movement against the president, Emmanuel Macron, and policies seen to favour the rich.

Mr Drouet’s lawyer called the arrest “totally unjustified and arbitrary”. He said Mr Drouet had intended to lay candles at Place de la Concorde in Paris and then meet others in a private place.

France’s minister for the economy, Bruno Le Maire, defended Mr Drouet’s arrest, saying: “It’s called respecting the rule of law . . . It’s normal that when you break the laws of the republic, you face the consequences.”

The authorities now appear to be clamping down on the continuing protests. The interior ministry wrote to local police chiefs this week saying that the rural and suburban roundabouts and toll booths which have been occupied for weeks should be cleared of protesters.

Some said that the arrest of Mr Drouet, often seen on TV as a gilets jaunes spokesman, could turn him into a sort of martyr figure and harden the resolve of demonstrators.

Following the arrest, the leftwing leader Jean-Luc Mélenchon, a fierce critic of Mr Macron, tweeted: “Again Eric Drouet arrested, why? Abuse of power. A politicised police targeting and harassing the leaders of the yellow vest movement.”

Benjamin Cauchy, a gilets jaunes media figure who takes a more moderate line on the protests, said after Mr Drouet’s arrest: “Unfortunately I have the impression that the government wants to radicalise the movement. The executive is pouring oil on the fire. They’ve just put another coin in the jukebox and the gilets jaunes song is going to go on playing, that’s for sure.” – Guardian