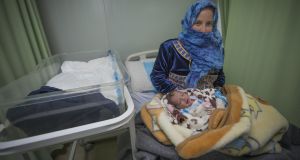 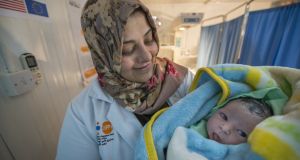 A midwife holds a newborn baby at the maternity hospital in the Zaatari refugee camp. Photograph: Peter Biro/European Union 2018 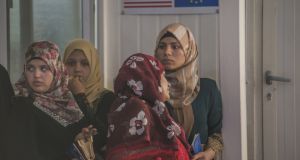 Women wait to see a midwife at the maternity clinic in the Zaatari refugee camp. Photograph: Peter Biro/European Union 2018 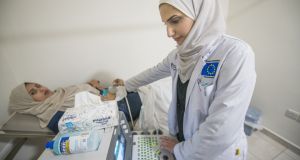 A doctor carries out a scan at the International Medical Corps maternity hospital in Irbid. Photograph: Peter Biro/European Union 2018

Baby Matin is less than five hours old when we meet. Matin’s mother Maran gingerly lifts her baby, swaddled in bundles of soft blankets, from the cot to show her to the group of well-wishers gathered by the end of the bed.

The 27-year-old already has three sons – two were born in the sprawling Zaatari refugee camp in Jordan after the family fled their home in the southern Syrian region of Daraa. She is overjoyed to finally have a daughter and smiles warmly as the nurse approaches to rearrange the baby’s quilts.

Maran’s mother reminds her daughter, who looks strikingly like an Irish woman with her green eyes and pale, freckled skin, to cover her head and face with a light blue scarf as a photographer snaps a few shots of the latest arrival in the maternity ward.

Maran is one of the estimated six women who will give birth at the Zaatari maternity hospital and clinic that day. A few metres down the corridor about 50 women sit patiently on plastic chairs awaiting their appointment at the United Nations Population Fund (UNFPA) and Jordan Health Aid Society International (JHASI) clinic.

“It’s the only clinic in the camp that provides paramedic services in case of an emergency and it’s famous because of the ante-natal care,” says Bouchta Mourabit, humanitarian co-ordinator at the camp, as he leads our group through the corridors of the single storey hospital. “That’s why we’ve had zero maternal deaths,” he adds with pride. “No woman has died here while having a baby and that is a big achievement.”

Many of the women in the clinic’s waiting area cradle newborn babies in their arms while dozens of children play around the room. An open doorway leads into the family planning clinic where a midwife sits with a collection of contraceptives on her desk including packs of the combined pill and condoms. Most women choose an IUD (intrauterine device), explains the midwife, adding that she inserts about 15 IUDs a week.

“Husbands are starting to see the benefits,” she says. “Families used to have 8-10 children, now it’s 4-5. They understand the implications better and are trying to control numbers.”

Specialist obstetrician Dr Siam says rising numbers of Syrians who live outside the camp attend the clinic to avail of its free services. This follows a decision by the Jordanian government in March 2018 to increase the cost of public health services for Syrian refugees almost five-fold in certain cases. Most of these Syrian women arrive at the clinic without their medical history and many leave as soon as they give birth, causing concern for the medical team at the centre.

The hospital is obliged under Jordanian law to accept any medical emergency that appears on its doorstep, says Dr Siam, adding that complicated deliveries, such as Caesarean sections, are referred outside the camp to bigger Jordanian hospitals.

Since opening in 2013, the hospital has delivered an estimated 10,300 babies. Nearly 80 per cent of the camp’s residents come from the Daraa region in southern Syria, just across the border from Jordan. Another 14 per cent have travelled from rural Damascus, which lies more than 110km north of Daraa.

The Zaatari camp hastily came into being in 2012 when thousands of people began to flee over the Syrian border. Since then, what began as a small collection of tents has evolved into an urban settlement of more than 78,000 people. Last year a solar plant funded by the German government and covering an area roughly the size of 33 soccer pitches was opened, providing 12-14 hours of electricity to camp residents a day.

One of the major goals of the maternity clinic, which also avails of energy from the solar plant, is to provide information on family planning and contraception to discourage Syrian teenager from becoming pregnant too early. In 2013, a third of the women attending the clinic were teenagers, often as young as 14. After five years of education and support for women in the camp, the number of teen pregnancies has dropped to just 10 per cent, says Mourabit.

“The family planning component was a real challenge within the Syrian community because if a woman decides to use family planning, it’s culturally accepted for the husband to take on a second wife. At the beginning there was some resistance but when the women in the camp started coming here they established a good relationship with the service providers. Now luckily we can see husbands coming with the wife and they’re both discussing the services available to them.”

This acceptance of family planning and efforts to reduce teenage pregnancies has not been as successful outside the camp. The International Medical Corps maternity hospital in Irbid, a city in northern Jordan about 25km south of the Syrian border which has become home to more than 74,000 Syrian refugees, frequently deals with women who have no knowledge of family planning and encounters significant numbers of teenage pregnancies.

Midwife Ohoud Alnami says nearly a third of the women who give birth at the hospital, which offers free treatment for Syrian mothers, are aged under 18. Many of these young women are at risk of giving birth prematurely, she says.

“When I mention family planning to some women they say ‘I can’t, my husband or my mother-in-law refuses to let me use contraception’. Sixty per cent of the time the issues come from the family. I explain the risks around pregnancy at such a young age to the mother-in-law and husbands but still, the women turn up pregnant again a few months later. When you have a 16 year old with two babies that’s not good. She’s still a baby herself.”

Upstairs, 17-year-old Ahar is resting after giving birth to her first child a few hours previously. The young mother looks exhausted but seems unperturbed by the arrival of a trio of female European journalists in her room. Under hospital rules, no male journalists are allowed to enter the area. Fatima (23), who gave birth to her second child the previous day and lies in the bed next to Ahar, is less happy about our arrival. She underwent a Caesarean and is still in a lot of pain explains her mother. Fatima would also prefer to be at home where she would not feel the need to wear the head scarf, she adds.

Only a small number of births take place at home as most families understand the potential risks of giving birth without medical support, says Alnami. The hospital, which predominantly offers care to Syrians but also to Jordanians who cannot afford the regular maternity costs, currently deals with about 300 deliveries a month but aims to push this number to 500.

Its bustling day clinic on the ground floor is testament to the staff’s efforts to provide information on contraception to expectant mothers of all ages. Staff are determined to supply women and their husbands with the information needed to make an informed decision about when to have children and often undertake field visits to family homes. However, many couples refuse this help. The pressure to give birth to a boy means many women feel they must continue having babies until a son arrives.

“Their future is controlled by the husbands and mothers-in-law. Some women come in saying I’ve already had three girls and I need a boy. I explain that even if you got pregnant every day you might never have a boy but they say their husbands will find a second wife if there is no boy. Some plead with us not to say anything, that they don’t want any problems. We are a crowded hospital but we try our best to give women all the information they need.”