Bernie Sanders hit by claims of sexism in 2016 campaign 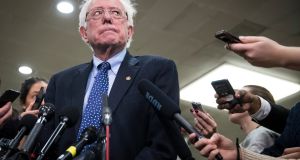 Senator Bernie Sanders: “I certainly apologise to any woman who felt she was not treated appropriately and, of course, if I run we will do better next time,” he said. Photograph: Sarah Silbiger/The New York Times

In February 2016, Giulianna Di Lauro, a Latino outreach strategist for US senator Bernie Sanders’s presidential operation, complained to her supervisor that she had been harassed by a campaign surrogate whom she drove to events before the Democratic primary in Nevada.

She said the surrogate – a term for celebrities or others who campaign on behalf of a nominee – told her she had “beautiful curly hair” and asked if he could touch it, Ms Di Lauro said in an interview. Thinking he would just touch a strand, she consented. But she said that he ran his hand through her hair in a “sexual way” and continued to grab, touch and “push my boundaries” for the rest of the day.

“I just wanted to be done with it so badly,” she said. When she reported the incident to Bill Velazquez, a manager on the Latino outreach team, he told her, “I bet you would have liked it if he were younger,” according to her account and another woman who witnessed the exchange. Then he laughed.

Now, as the independent Vermont senator tries to build support for a second run at the White House, his perceived failure to address this issue has damaged his progressive bona fides, delegates and nearly a dozen former state and national staff members said in interviews during the last month.

And it has raised questions among them about whether he can adequately fight for the interests of women, who have increasingly defined the Democratic Party in the Trump era, if he runs again for the presidential nomination in 2020.

Mr Sanders told CNN on Wednesday night that he was not aware of allegations of sexism and pay discrimination and pledged to “do better” should he run again in 2020. “I certainly apologise to any woman who felt she was not treated appropriately and, of course, if I run we will do better next time,” Mr Sanders said.

The former staff members said complaints about mistreatment and pay disparity during and just after the campaign reached some senior leaders of the operation. Some women said the fledgling 2016 campaign was disorganised and decentralised, which made it hard to know who to turn to in the case of mistreatment.

“I did experience sexual harassment during the campaign, and there was no one who would or could help,” said Samantha Davis, the former director of operations in Texas and New York, who also worked on the campaign’s advance team. She said that her supervisor marginalised her after she declined an invitation to his hotel room.

Sen. @BernieSanders tells @andersoncooper he had no knowledge of allegations of sexual harassment and pay discrimination against women in his campaign organization during his 2016 bid for the White House, adding, "of course, if I run [again], we will do better next time." pic.twitter.com/2tPlmiYfB3

Jeff Weaver, Mr Sanders’s 2016 campaign manager and currently a top adviser, said in an email that “anybody who committed harassment on the campaign would not be asked back” and expressed regret for some of the operation’s shortcomings.

In interviews, women told of makeshift living accommodations on the road, where they were asked to sleep in rooms along with male co-workers they did not know. Women who had access to salary records were taken aback to learn that some female staff members made thousands of dollars less than their male counterparts.

Two delegates who supported Mr Sanders two years ago recently told his staff that he cannot run for president again without addressing the sexism they believe surfaced in his last campaign. “There was an entire wave of rotten sexual harassment that seemingly was never dealt with,” one of the delegates wrote in a December email, obtained by The New York Times, to a Sanders political strategist.

Friends of Bernie Sanders, the senator’s campaign committee, said in a response to questions from the New York Times that there were a number of actions taken during the 2016 campaign regarding harassment and sexism, including employee counselling and a campaign-wide review to standardise pay, and that there was a set of procedures and guidelines for workplace conduct that staff members were required to read. It also said it had developed a new harassment policy for Mr Sanders’s Senate campaign last year.

Political campaigns can be gruelling experiences for both the women and men involved. But some involved said they considered the treatment of women on the Sanders campaign especially upsetting because the senator positioned himself as a champion of progressive ideals and equality, according to interviews and messages shared on Facebook.

“I don’t think he has to be the vehicle or the platform for the movement that emerged from his campaign,” said Sarah Slamen, who worked for the campaign in Texas, was the state co-ordinator in Louisiana and helped build out Our Revolution, a progressive organisation born from Mr Sanders’s presidential campaign.

“Do you know how hard that is for me to say after working so hard for him?” she said.

In recent weeks, a Facebook group for campaign alumni has become a sounding board for complaints about harassment, lewd comments and gender discrimination. Some alumni have requested a meeting with the senator and his campaign leadership team to address the “overall toxic atmosphere of the 2016 campaign,” according to a screenshot of a post viewed by the New York Times. Politico first reported on the request.

Ms Di Lauro, the former strategist in Nevada, was emphatic in her own Facebook posts. “I have to speak up about this now because I hope it will be of service to the next Sanders campaign,” she wrote on December 7th.

Pay disparity became another source of frustration among some women, according to former staff members, especially given that labour was one of the senator’s signature issues. During his campaign, Mr Sanders earned kudos for paying his interns, a relatively unheard-of practice.

Ms Davis, the former state director, said she was originally paid about $2,400 (€2,100) a month as a senior staff member and saw in the campaign’s records that a younger man who was originally supposed to report to her made $5,000 a month. She said that she brought the issue to the campaign’s chief operating officer, who adjusted her salary to achieve parity.

“I helped at least a dozen women request raises so that they would be paid on par with their male peers,” Ms Davis said.

The senator’s campaign committee acknowledged that there were pay disparities but said salaries were based on experience or the nature of the job and “never determined based on any consideration of an individual’s gender or of any other personal characteristic”.

During the campaign, the committee said, it conducted a review to try to standardise pay across the states and within headquarters. – New York Times