Why the eurosceptic surge may be a good thing for Europe

Opinion: If there is one thing Europe urgently needs it is less reverence for the European project and more realpolitik 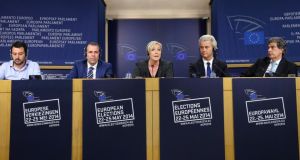 ‘Perhaps they will revert to type, and their Eurotrash Tower of Babel will teeter and collapse.’ From left, Matteo Salvini, Harald Vilimsky, Marine Le Pen, Geert Wilders and Marcel de Graaff address a joint news conference at the European Parliament in Brussels this week. Photograph: François Lenoir/Reuters

The curious thing about last weekend’s European election result was how the narrative was fixed long before the first ballot was even cast. For months the media line was clear: the enemy is at the European Union’s gate, the Strasbourg parliament will be shelled, the Brussels barricades breached.

Monday morning was a sobering moment in EU history. In France, the land of founding European fathers Robert Schuman and Jean Monnet, a quarter of those who voted gave their support to a xenophobic, populist party. Ahead of Britain’s general election next year, David Cameron may yield to the Nigel Farage barrage and co-opt even more UK Independence Party bluster in his dealings with Brussels. Across the continent, extreme and populist parties have blossomed.

But what of the barking dogs that didn’t bite? Dutch Eurosceptic Geert Wilders finished the election in third place, his peroxide political tail between his legs. Despite plenty of extremist choice, more Italians backed Prime Minister Matteo Renzi’s Democratic Party than in any election since 1958. Germany’s Alternative für Deutschland (AfD) won 7 per cent and seats, but failed to attract more absolute support than at its first outing at last September’s federal election, despite its core focus on euro reform.

Amid the media noise, it’s easy to overlook the contradiction at the heart of Eurosceptic logic. For years they have complained how ineffectual and toothless the European Parliament is, how it isn’t a real parliament at all because it doesn’t have the same powers as national chambers. No sooner have they won extra votes in this supposedly anaemic parliament, however, they announce how effective it will be as a battering ram to demolish the EU from within. But let’s not forget that their core observation of the EU from last week still holds: Brussels’s business is shaped by the European Commission and democratically elected leaders meeting in the European Council – where Farage and friends hold no sway.

Perhaps, flushed with success, the euro populist grouping can excise their intrinsic xenophobia, bridge the cultural gaps of their intolerance politics and become a Brussels-beating European Disunion. Or perhaps they will revert to type, and their Eurotrash Tower of Babel will teeter and collapse.

While they watch and wait, mainstream MEPs have time to find their voice against Farage in the new parliament rather than gape like stunned mullets at his studied irreverence.

If there is one thing Europe urgently needs it is less reverence for the European project and more realpolitik. As socialist lead candidate Martin Schulz pointed out in his campaign, younger Europeans’ frame of reference for the EU is Easyjet weekends and Erasmus study opportunities, not the graveyards of their grandfathers’ generation.

As they get the vote, start working and move into positions of power across the continent, they have yet to hear a new, convincing narrative why the EU is active, relevant and essential in their daily lives.

Our politicians are well able to do the hard sell for votes in a domestic election. Why, then, in European elections, do they shift gears to trot out truisms about how the EU is crucial for peace and prosperity and vice versa? Why are they surprised when voters, out of apathy or a feeling their intelligence is being insulted, stay away from European election polls?

Even Germany’s Wolfgang Schäuble, an ardent pro-European, has had enough of simulated EU elections. The FN success in France, he warned this week, was a failure of mainstream European parties that offer voters “no difference . . . in the substance” of their politics. The recent campaign was problematic, he said, for framing the EU in “pro-European or Eurosceptic positions”. Or, as George W Bush might have put it: you’re either with us or you’re with the Eurosceptics. Such flawed, binary logic has dogged European politics for decades and has been exploited by the Farage-Le Pen-Wilders gang.

A body’s immune system only kicks in when there is something to react against and a body politic is no different. The EU’s temperature is rising but it is not facing collapse; instead its metabolism is about to be put through its paces. Despite Eurosceptic gains last weekend, EU mainstream parties still speak for the vast majority of Europeans.

And, who knows? Last weekend’s result may prove a shot in the arm for the European Parliament. Having more Eurosceptic MEPs may force the others to explain more clearly how they shape our daily lives. As they say in Germany, friction generates warmth.