Arnaud Beltrame, who swapped places with hostage, honoured on national day of mourning 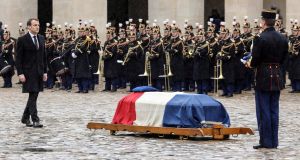 French president Emmanuel Macron walks towards the coffin of Arnaud Beltrame at the Hótel des Invalides in ParisPhotograph: Ludovic Marin/Pool via Reuters

France has honoured its heroic gendarme Arnaud Beltrame, who died saving hostages’ lives at a supermarket siege last week, with all the respect, gratitude and emotion the grieving nation could muster.

In a state ceremony that conveyed the country’s pride and profound sadness, President Emmanuel Macron paid tribute on Wednesday to the officer who he said had the “gratitude, admiration and affection of the whole country”.

It was the first time Mr Macron had been called upon to deliver a state funeral homage since his election in May 2017. He stood grim-faced as the Marseillaise was played. He speech made reference to Joan of Arc, members of the French resistance and others who had died for the country.

Before hundreds of people, including former presidents, government ministers, military officers and members of the public, Beltrame’s coffin was carried into the cour d’honneur at Les Invalides by 10 gendarmes who had known him. Hundreds more gathered outside.

Beltrame’s kepi, the gendarmerie’s headgear, in which he kept a photograph of himself with his wife, Marielle, and his decorations were carried by two officers. He was posthumously promoted to colonel and made a commander of the Legion d’Honneur.

Beltrame was hailed a hero after volunteering on Friday to take the place of a female hostage being held by the suspected Islamist gunman Radouane Lakdim (25), who had already killed three people.

Lakdim hijacked a car, gunning down a passenger, then stormed a busy supermarket in the town of Trèbes near Carcassonne, killing a member of staff and a customer and declaring his allegiance to Islamic State. He was holding a 40-year-old woman hostage as police and special forces surrounded the building.

Beltrame gave up his own weapon and offered to take the place of the woman, named only as Julie, the mother of a two-year-old girl who worked on the checkout. After a three-hour siege, the gendarme was stabbed several times as he tried to disarm Lakdim. The gravely injured officer was flown by helicopter to hospital where he died a few hours later, his wife at his bedside.

Mr Macron spoke of the long minutes that passed as Beltrame’s colleagues watched as he “put down his weapon and walked alone to join the terrorist”.

“With all his experience . . . he surely knew he had a rendezvous with death,” Mr Macron said. “He took this decision which was not just a sacrifice but was first of all being true to himself, true to his values and true to what he was and what he wanted to be.

“He would not have left his place to anyone because he knew the example comes from the top,” he added. “The light he has lit in us has not gone out.”

Wednesday’s ceremony also honoured the terrorist’s three other victims: Christian Medvès (50), who worked as a butcher at the Super-U in Trèbes; Hervé Sosna (65), who was shopping when Lakdim shot him, and Jean Mazières (61), a passenger in the hijacked car. The driver of the vehicle, Renato Silva (26), was shot in the head and is in a critical condition in hospital.

The funeral procession crossed Paris, stopping outside the Panthéon. The words engraved on the facade of the 18th-century former church where France’s great and good are buried had never seemed more appropriate: “To great men, a grateful country.”

Beltrame and his wife were married in a civil ceremony in 2016 and were due to redeclare their vows in a church ceremony in June. The priest who was to have officiated at the wedding was called to Beltrame’s bedside where Marielle was keeping vigil on Friday evening to give him the last rites.

Afterwards, his widow, a veterinarian, told La Vie newspaper he was an “ideal husband” and a devoted gendarme.

“Arnaud was profoundly attached to what he called the ‘gendarmerie family’ for which he didn’t count the hours, or his engagement. He knew how to unite his men, to give them their momentum, to enable them to give the best of themselves. He was motivated by very high moral values, the values of service, generosity, giving oneself, abnegation,” she said. – Guardian