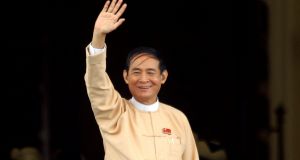 Win Myint waves after he was elected as Myanmar’s president in parliament at Naypyitaw, Myanmar on Wednesday. Photograph: Reuters

Myanmar’s parliament on Wednesday picked a close ally of de facto leader Aung San Suu Kyi as the country’s new president, a move unlikely to affect a delicate balance of power in a country where the army has retained a large political role.

Win Myint, who a week ago resigned from his post as the lower house speaker, was chosen by both chambers of the parliament where Suu Kyi’s ruling National League for Democracy (NLD) party holds a comfortable majority. The outgoing president, Htin Kyaw, who was also close to Suu Kyi, retired “in order to take rest from the current duties and responsibilities” amid visible weight loss and speculation over his health.

The election of the 66-year-old Win Myint, who is a life-long NLD member, is likely to mean a continuation of Suu Kyi’s dominance over the executive and little change to the course taken by her nearly two-year-old administration, lawmakers and analysts say.

Win Myint won the election with 403 votes out of 636 cast by lawmakers. The parliament speaker did not say when Win Myint would be sworn in, although the ceremony was expected to take place on Thursday. “There won’t be policy changes. The policy will continue as previously under the former president,” said Kyaw Tote, a lawmaker from the NLD. The president is the head of state and government in Myanmar, and under the constitution has far-reaching powers. However, Htin Kyaw’s role was more ceremonial because Suu Kyi has been Myanmar’s de facto leader since April 2016.

Politicians and analysts expect this arrangement to continue under Win Myint. A constitution drafted by the former junta bars Nobel Peace Prize laureate Suu Kyi from the top office and so she hand-picked Htin Kyaw, a close ally, to become president following a historic landslide election victory in 2015.

The charter also reserves for the army one quarter of the seats in parliament and several major cabinet posts, including defence, interior and border affairs, giving it an effective veto over constitutional change and control of security affairs. The incoming president is a member of a very narrow circle of Suu Kyi’s trusted advisers.

Analysts believe it is that loyalty and trust that prompted her to tap him as Htin Kyaw’s replacement. He was among a few dozen NLD members, including Suu Kyi, elected to parliament in 2012 by-elections as the country began a dramatic transition from nearly 50 years of military rule.

“He is good at both legislation and administration and I assume that is a good thing,” said NLD upper house representative Nwe Nwe Aung. Before his appointment as lower house speaker in April 2016, Win Myint shared an austere one-room chamber with his wife in a compound for lawmakers in