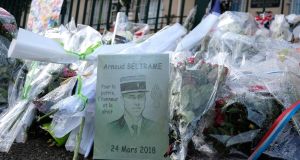 Tributes to Arnaud Beltrame killed in jihadist attack are pictured in front of barracks of the gendarmerie on Wednesday. in Carcassonne. Photograph: Eric Cabaniseric/AFP/Getty

The 18-year-old girlfriend of a gunman who claimed allegiance to Islamic State before killing four in a shooting spree and supermarket hostage-taking in southern France has been placed under formal investigation for terrorist conspiracy.

The woman, named in the media as Marine, appeared before judges on Monday, and is under investigation for conspiring with terrorists with a view to carrying out attacks. She remains in temporary police custody.

The state prosecutor François Molins said that - like the 25-year-old gunman, Radouane Lakdim - she had been on a watchlist for potential extremists.

Marine, who had converted to Islam aged 16, had shouted “Allahu Akbar” (Arabic for “God is Great”)when police arrested her, the prosecutor said. Her phone contact with Lakdim had stopped in January but she is thought to have continued talking to him on secure apps. The morning of the attacks, she had posted a message on social media saying that unbelievers were promised to hell, Mr Molins said. She denied being aware of or associated with the attacks.

Her sister told French television that she had shown no signs of radicalisation.

Marine, who lived with her parents, was arrested within hours of the attacks committed on Friday in Carcassonne and nearby Trèbes in southern France.

Lakdim (25) who was born in Morocco but moved to France as a baby and had French nationality since the age of 12, first shot dead a car passenger in Carcassonne on Friday morning, injuring the driver and stealing the car. He then drove towards a police barracks and shot at four officers out for a jog, seriously injuring one of them.

Next he targeted the Super U supermarket in nearby Trébes, running in with a semi-automatic pistol, a hunting knife and three homemade explosives shouting that he was a soldier from Islamic State, also known as Isis.

He first shot dead a supermarket butcher and then a pensioner at the tills. After police entered the store, the gendarme Lt-Col Arnaud Beltrame offered to swap places with a female hostage who Lakdim was holding with a gun to her neck as a human shield. When Lakdim accepted, Beltrame - who had surrendered his police weapon - was held for over three hours before police stormed when they heard shots.

Beltrame, who had suffered bullet wounds to the body, died later from severe knife wounds across the neck. The French president, Emmanuel Macron, will lead a national commemoration for Beltrame on Wednesday.

Lakdim was shot dead by police at the scene. He had been on a list of suspected extremists since 2014 and had been under surveillance. Earlier this month, he had been summoned by anti-terror police for questioning, a police source told AFP. Lakdim was sent a letter in March asking him to arrange a face-to-face meeting with agents from France’s domestic intelligence agency, DGSI. Shortly after he was sent the letter, he carried out the attacks.

A 17-year-old friend of Lakdim’s who had been questioned was released on Monday “due to the absence of incriminating evidence at this stage”, prosecutors said.–Guardian