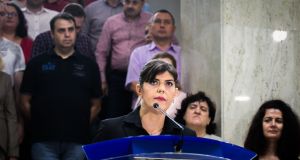 Romania’s chief anti-corruption prosecutor Laura Codruta Kovesi has urged compatriots and colleagues not to abandon the fight against graft, after she was sacked at the behest of a government that she accused of trying to muzzle the justice system.

President Klaus Iohannis reluctantly signed a decree to remove Ms Codruta Kovesi on Monday, bowing to a constitutional court ruling that he could not block justice minister Tudorel Toader’s decision to fire her.

Mr Toader said the head of Romania’s national anti-corruption directorate (DNA) had abused her power, even as she was hailed internationally for prosecuting government ministers, deputies, mayors and powerful businessmen in one of the EU’s most corrupt states.

Since taking power in January 2017, a government led by the scandal-plagued Social Democrats (PSD) has sought to soften anti-corruption legislation, prompting Romania’s biggest street protests since its 1989 anti-communist revolution and strong shows of public support for Ms Codruta Kovesi (45).

“I have a message for the Romanian people: corruption can be defeated. Don’t give up!” Ms Kovesi said after delivering a similar rallying cry to fellow prosecutors, who flanked her as she spoke about her five years as head of the DNA.

Noting that Romania’s council of magistrates had found no reason to remove her, she said her dismissal “will leave a big question mark hanging: Will there be a discretionary subordination of prosecutors to the justice ministry?”

“The current political direction is not leaning towards an efficient justice system, but rather is aimed at blocking it,” she added.

“The brutal way in which they are trying to force through justice reforms shows that they want protection for [deeds committed in] the past, the present and the future.”

In its latest criminal justice reform, the government pushed through changes last week to partially decriminalise abuse of office, which PSD leader Liviu Dragnea was last month sentenced to 3½ years in jail for committing.

Mr Iohannis denounced the changes and the way they were rushed through parliament as “simply revolting” and said he would not sign them into law, prompting Mr Dragnea – who is barred from public office due to a vote-rigging conviction – to threaten to seek the president’s impeachment.

“The decisions of the constitutional court need to be implemented both by the president and the majority in the parliament,” Mr Iohannis’s spokeswoman Madalina Dobrovolschi said she announced the removal of Ms Codruta Kovesi.

“But the fight against corruption will not stop . . . Irrespective of the name of the new chief anti-corruption prosecutor, the DNA is obliged to continue to work in a professional way, at the highest levels of performance.”

EU spokesman Christian Wigand said “the ability of the [DNA] to maintain its track record in challenging circumstances was an important sign of sustainability” for Romania’s anti-corruption efforts.