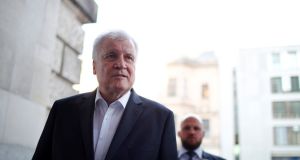 German chancellor Angela Merkel has called into line her rebellious interior minister over an unco-ordinated intervention in the European Commission’s Brexit negotiations.

Horst Seehofer, who is also leader of Bavaria’s CSU party, which is allied to Dr Merkel’s CDU, sent a letter on June 27th to the European Commission, warning that its rigid Brexit line could weaken EU security architecture. That in turn, he wrote, “would affect all EU citizens and undermine their fundamental need for security”.

“The ever-present threat of cross-border terrorism shows the need for unlimited co-operation in future,” he wrote in the letter, first reported on last week by the Financial Times.

On Friday a spokesman for Dr Merkel declined to comment on whether the letter was co-ordinated with the chancellor. Behind the scenes, though, the German leader was said to be livid. Since Brexit talks have begun, she has muzzled all her ministers and deferred to the commission in negotiations to head off any attempts to divide the EU27 member states.

News of Mr Seehofer’s solo run on Brexit came days after he agreed an uneasy truce with Dr Merkel on migration. He had threatened to resign as interior minister unless new measures were agreed to cut the numbers of migrants seeking asylum in his home state of Bavaria.

With an eye on October’s state election there , the ruling CSU is anxious to burnish its law-and-order credentials with voters in the hope of clawing back its absolute majority.

But polls suggest that may be a far-fetched hope given the far-right Alternative für Deutschland (AfD) – steady on 13 per cent support– stands in the way of its absolute majority.

In a major blow for the CSU, which has ruled Bavaria almost continuously in the post-war era, a new poll suggests the migration row hurt rather than helped the party. After bringing the coalition to the brink of collapse in Berlin, the CSU in Bavaria is down now to just 38 per cent support – some 10 points off its last election result.

A poll defeat in October would raise huge questions about the CSU front bench and underline Mr Seehofer’s diminishing authority as party leader.

Some 54 per cent of Germans say they are dissatisfied with his work since becoming federal interior minister earlier this year. His challenge this week is to deliver on refugee return agreements with unenthusiastic interior minister colleagues in Austria and Italy.

Matteo Salvini, Italy’s populist interior minister, told Der Spiegel magazine: “We cannot take in a single refugee more ... on the contrary, we want to give up some.”