UK elections: How The Irish Times is covering them

Live results, news and analysis will be available throughout the count in Britain and Northern Ireland 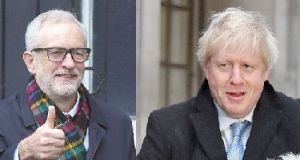 Follow The Irish Times for comprehensive coverage of the results from Britain and Northern Ireland.

Details of an exit poll giving the first projection of an outcome will be available after polls close at 10pm.

Complete coverage of the counts will continue through the night and into Friday morning when the makeup of the next government is expected to become clear.

London Editor Denis Staunton, Northern Editor Gerry Moriarty and columnist Fintan O’Toole will provide analysis and comment on the results as they emerge.

Northern correspondent Freya McClements will report on how parties in the North are dealing with the outcome, while Public Affairs Editor Simon Carswell will be with rival Conservative, Labour and Liberal Democrats supporters as the party postmortems begin.

What it all means for Ireland, the economy and Europe will be explained by Cliff Taylor and Pat Leahy, along with Europe Editor Patrick Smyth in Brussels, as the result - and particularly the fortunes of Boris Johnson - is expected to shape the nature of Britain’s exit from the EU.