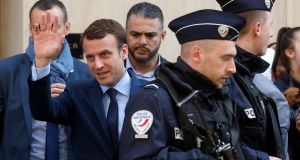 Emmanuel Macron leaves his home surrounded by policemen in Paris on Monday, after the first round of presidential elections where he ended in first place. Photograph: Benoit Tessier/Reuters

European leaders are usually scrupulous observers of the unwritten diplomatic convention that precludes them from commenting in the middle of a neighbour’s election. On Sunday evening, such niceties went out the window. One by one, mainstream politicians across the continent lined up to shower praise on Emmanuel Macron, the 39-year-old independent centrist whose strong showing in the first round of France’s presidential election has put him within touching distance of the Élysée Palace.

Chancellor Angela Merkel’s spokesman wished Macron “all the best for the next two weeks” and lauded his vision for “a strong EU and social market economy.” Taoiseach Enda Kenny tweeted that he had spoken to Macron as soon as the outcome was clear, offering “my congrats on his victory in 1st round & encouragement for his pro-European platform”. In Brussels, European Commission president Jean-Claude Juncker bid Macron “good luck” in the second round, while Michel Barnier, the commission’s chief Brexit negotiator, tweeted: “Patriot and European, I will put my trust in Emmanuel Macron on May 7. France must remain European.”

The relief was understandable. After the electoral shocks of Brexit and President Donald Trump, here was a reminder that not every vote must defy expectations. The result, with Macron and Front National leader Marine Le Pen qualifying for the run-off at the expense of the two blocs that have alternated power in France through the postwar era, upends many of the old certainties in French politics. But it was also widely flagged in advance – French pollsters had an almost perfect election – and it leaves open the possibility, indeed the likelihood, that French policy will continue on much the same course as before.

For European leaders who looked on anxiously as French voters went to the polls, Macron’s victory will be seen as proof that the centre can hold – that outward-looking, generous and pro-European policies can still trump nativism, protectionism and ethno-nationalism.

In most EU capitals, this will be seen as the best possible outcome. A contest between Le Pen and François Fillon, the centre-right former prime minister who came third, would have pitted two pro-Russian candidates against one another, presenting the EU with huge difficulties in dealing with Ukraine, Syria and innumberable other issues while straining the Franco-German axis that still drives the European project.

Had Le Pen faced Jean-Luc Mélenchon, the radical left leader who made a late surge in the opinion polls, French voters would have had to choose between two candidates who are hostile to free trade and the euro and have called into question France’s membership of the EU itself. Meanwhile, Le Pen’s presence on the ballot paper on May 7th offers Macron his surest route to victory. Opinion polls have consistently shown him leading Le Pen in a two-way contest; his margin of victory could be up to 25 per cent, according to some pollsters, with voters of different ideological stripes uniting behind him in order to keep the Front National out of office.

Such tactical voting gave Jacques Chirac a landslide 82 per cent of the vote against Marine’s father, Jean-Marie, in 2002, and has prevented the far-right party from making inroads at regional or parliamentary level despite its strong support base.

As a result, the European mainstream sees its preferred candidate – pro-EU, pro-free trade, socially and economically liberal – on the cusp of victory. A Macron Élysée would enhance the EU27’s negotiating position going into the fraught Brexit talks by making it easier to strike common positions. At a time when the EU, in France and elsewhere, is facing a crisis of legitimacy, a President Macron would give it a dynamic and articulate advocate when it needs it most.

For the Government in Dublin, wariness about the potential for another integrationist push under Macron will be trumped by the assumption that the next president will be less hostile to the Republic’s corporate tax regime (Macron wants to make a big cut to France’s own company tax rate) and the knowledge that Irish officials, who built up good relationships with Macron when he was an economic adviser at the Hollande Élysée, knows and understands the Irish perspective.

For all that, however, Macron’s strong showing, and in particular the reaction it has stirred, also highlights some acute dangers for the European centre. The first is complacency. Macron has an imposing lead over Le Pen in the polls and has already received endorsements from several defeated rivals. His 20-point lead over Le Pen is of an entirely different order to the gap that separated Donald Trump from Hillary Clinton. But a lot has changed in France between 2002 and 2017.

If, as polls suggest, Le Pen wins 40 per cent of the vote, it would be a stunning result that would fill the party with confidence ahead of the next presidential election in 2022

Fifteen years ago, Jean-Marie Le Pen’s first-round success produced a sense of national trauma. Chirac did not celebrate his first-round victory but instead adopted the pose of chief mourner on his solemn procession to the second round. In contrast, Sunday’s euphoria from the Macron camp highlights how the Front National’s presence as a major force has been accepted as a fact of French political life.

Even if Macron succeeds in persuading voters to turn up and give him a commanding majority in two weeks’ time, he and the rest of the French mainstream must still come up with a persuasive long-term response to the threat of the Front National. If, as polls suggest, Le Pen wins 40 per cent of the vote, it would be a stunning result that would fill the party with confidence ahead of the next presidential election in 2022.

A decisive victory for Macron next month would not necessarily guarantee him the space to implement his agenda. The man who set up his political movement just a year ago has no serious presence in parliament, so his room for manoeuvre will depend on the outcome of legislative elections in June and on his capacity to assemble a durable majority.

Nor will a Macron victory reverse another of the election’s remarkable features: the collapse of the traditional party system. In particular, the disastrous showing of Benoît Hamon of the Socialist Party, who came fifth with 6.3 per cent of the vote, reflects a crisis of social democracy that goes far beyond France.

At the surface, Sunday’s outcome offers France – and by extension the rest of Europe – a degree of stability and continuity. But the tectonic plates continue to move.