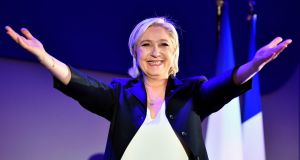 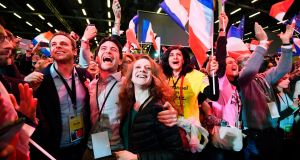 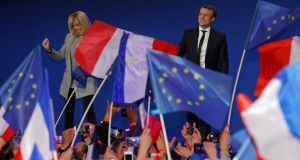 Emmanuel Macron, head of the political movement En Marche!, arrives on stage with his wife Brigitte Trogneux to deliver a speech at the Parc des Expositions hall in Paris after early results in the first round of 2017 French presidential election. Photograph: Philippe Wojazer/Reuters

Emmanuel Macron and Marine Le Pen won the first round of the French presidential election tonight, presenting France with a choice between the young, largely untried independent centrist and the leader of the extreme right-wing Front National (FN) in the May 7th runoff.

Mr Macron won 23.9 per cent of the vote to 21.7 per cent for Ms Le Pen, according to Ipsos-Sopra Steria estimates.

Francois Fillon, the former prime minister and the candidate for the conservative Les Républicains (LR) came in third at 20 per cent, while the far left candidate Jean-Luc Mélenchon won 19.2 per cent.

Speaking in the FN’s northern stronghold of Hénin Beaumont, Ms Le Pen said: “The great debate of this election can at last begin. Savage globalisation that endangers our civilisation is the real issue of this election.”

The polling companies that accurately predicted the results of the first round have consistently shown that Mr Macron would defeat Ms Le Pen by a margin of more than 20 percentage points in the second round.

Socialist and LR officials, including prime minister Bernard Cazeneuve and Mr Fillon, asked the French to vote for Mr Macron in the runoff .

Ms Le Pen’s supporters were disappointed she was not in the lead, but were encouraged by the fact she gained one million votes over her 2012 score, and is two percentage points behind Mr Macron.

For Mr Macron (39) to have led the first round, and to be favoured to win the runoff, is an extraordinary feat.

Two years on president Francois Hollande’s staff and two years as economy minister are the sum total of his political experience. Mr Macron founded his movement, En Marche!! only one year ago, and has never been elected to political office.

Ms Le Pen (48) is the daughter of Jean-Marie Le Pen, who founded the FN in 1972. She trained as a lawyer and has struggled to transform the party’s racist, anti-Semitic image since succeeding her father as leader of the FN in 2011.

The elimination of the ruling socialists and the neo-Gaullist LR, the parties who alternated in power since the foundation of the Fifth Republic in 1958, marks a total realignment of the political system.

The only thing that Mr Macron and Ms Le Pen agree on is that the left-right division is finished.

“Today, it is time to end a system that doesn’t work, and which has ruled our country for 30 years,” Mr Macron said.