French election: The polls, the candidates, the issues

The presidential election starts on Sunday. How will it work? Who’s in the race? 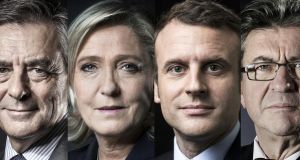 WHAT DO THE POLLS SAY?

Support for the front-runners, Emmanuel Macron and Marine Le Pen, eroded towards the end of the campaign, while Francois Fillon and Jean-Luc Mélenchon gained ground. Pollsters stress that any two of the four leading candidates could reach the run-off.

WHO ARE THE CANDIDATES?

Emmanuel Macron (39) is the youngest candidate. Polls indicate he would defeat Marine Le Pen by the widest margin of more than 20 points in the second round. Macron left Banque Rothschild to become President Francois Hollande’s economic adviser, then economy minister. He founded his own centrist political movement, En Marche!! (Forward!), last year and has never been elected to political office.

Marine Le Pen (48) has worked hard to “undemonise” the extreme right-wing Front National (FN) since taking over the party in 2011. Like her father Jean-Marie, who founded the FN in 1972, she has made the rejection of immigration her main issue. An MEP, Le Pen is likely to be charged with using EU funds to pay party workers in France.

Francois Fillon (63) is the candidate of the neo-Gaullist party Les Républicains (LR). Fillon was Nicolas Sarkozy’s prime minster from 2007 until 2012. His ability to demand sacrifices of the French public in Thatcher-like economic reforms has been compromised by revelations that his Welsh wife, Penelope, and the couple’s children received more than one million euros from allegedly fake jobs.

Jean-Luc Mélenchon (65) is, like Le Pen, an anti-Europe MEP. A former Trotskyist, Mélenchon broke with the socialist party and launched his own movement, La France Insoumise (or France Unbowed). He is a formidable orator who has cultivated young voters via social media. Mélenchon’s repeated use of holograms to project his image from one rally to other locations created a media sensation.

WHAT ARE THE ISSUES?

Le Pen and Mélenchon both promised to attempt to re-negotiate EU treaties before holding a referendum on a “Frexit”. But polls show between two-thirds and three-quarters of the French want to keep the euro. In the last week of the campaign, Le Pen stopped talking about returning to the French franc. At a rally on April 18th, Mélenchon said he no longer wants to take France out of the EU or the euro.

Fillon wants to continue with an EU ruled by heads of state and government. Macron is the only candidate who enthusiastically endorses greater European integration.

HOW THE ELECTION WORKS

Any candidate who collects the signatures of 500 of France’s 36,000 mayors qualifies to stand for president. Eleven men and women, including three from Trotskyist backgrounds, will appear on the first round ballot on April 23rd. Results will be announced between 8pm and 9 pm on Sunday evening.

The two candidates who win the most votes on Sunday will face each other in the May 7th runoff. Fillon claims he is the only candidate who could be certain of winning a parliamentary majority, essential for carrying out one’s programme, in legislative elections on June 11th and 18th.