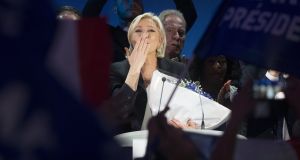 French presidential election candidate for the far-right Front National, Marine Le Pen, blows a kiss to the crowd during her speech after finishing second in the first round of the election in Henin-Beaumont, Northern France. Photograph: Olivier Hoslet/EPA

Far-right leader Marine Le Pen will face the centrist Emmanuel Macron in the run-off for the French presidency, according to projections, after a landmark first-round result that has remade the country’s political landscape.

Mr Macron, a 39-year-old ex-banker fighting his first election, led the field with 23.7 per cent of the vote, a remarkable achievement for the former economy minister, who had set up his political party just a year ago.

“Today we are clearly turning a page in French political life,” Mr Macron said after the preliminary results came in.

He was trailed by Ms Le Pen, who came second with 21.7 per cent and takes a place in the run-off for the Front National for the second time. Her father, Jean-Marie, achieved the same feat in 2002.

Taoiseach Enda Kenny late tonight tweeted that he had contacted Mr Macron to congratulate him on his first-round victory.

“Spoke to @EmmanuelMacron this evening - offered my congrats on his victory in 1st round & encouragement for his pro-European platform,” he wrote.

For the first time in the postwar era, neither of the two mainstream political blocs that have dominated modern French politics will have a candidate in the run-off, which takes place on May 7th.

Former prime minister François Fillon of the centre-right Les Républicains won 19.5 per cent, according to the estimates announced by France 2 television at 8pm French time (7pm Irish time) on Sunday.

Partial results published by the interior ministry, based on 20 million votes counted, put Mr Fillon ahead of Mr Mélenchon.

Spoke to @EmmanuelMacron this evening - offered my congrats on his victory in 1st round & encouragement for his pro-European platform.

He was tied with the radical left candidate, Jean-Luc Mélenchon, who performed a late surge in recent weeks and also won 19.5 per cent, according to the estimates.

The Socialist Party candidate, Benoît Hamon, lagged far behind on 6.2 per cent.

After controlling the Élysée Palace for five years under François Hollande, the socialists have suffered a stunning reverse. Hamon was squeezed by Mélenchon, who quit the Socialist Party in 2008, and Macron, a former socialist economy minister who positioned himself as a social and economic liberal.

The party will now focus on winning enough parliamentary seats in legislative elections in June in the hope of forming an influential group in the national assembly.

The result is also a dramatic defeat for the centre-right. Mr Fillon, a social conservative who served as Nicolas Sarkozy’s prime minster for five years, was favourite for the presidency after he defeated Mr Sarkozy and another former prime minister, Alain Juppé, in the Les Républicains primary. But his campaign was plagued by a fake jobs scandal and never recovered.

Mr Macron will go into the second round as overwhelming favourite, with opinion polls conducted before the first round suggesting he would comfortably defeat Ms Le Pen.

The elimination of the two mainstream parties from the first round showed the “malaise” of French society, a member of Mr Macron’s campaign said. “When Macron started his campaign, they said that somebody who was not part of a major political party could not win the election. The fact that he did win shows a deep malaise in French society,” senator Gerard Collomb, mayor of Lyon, said on France 2 television.

Ms Le Pen, who will see her strong showing as vindication of her efforts to detoxify the far-right party, also benefitted from splits elsewhere and the implosion of Mr Fillon’s campaign. She gained four percentage points on her showing in the 2012 presidential election, when she was eliminated in the first round with 17.9 per cent of the vote.

“This result is historic. It puts on me a huge responsibility to defend the French nation, its unity, its security, its culture, its prosperity and its independence,” Ms Le Pen told supporters.

“The main thing at stake in this election is the rampant globalisation that is endangering our civilisation,” she added, urging French voters to shake off the shackles of an “arrogant elite”.

In a tweet shortly after the result was confirmed, the MP Marion Maréchal Le Pen, Marine’s niece, said the outcome was “a great victory for patriots”.

Despite fears that broad disillusionment with politics could keep voters away, pollsters estimated that the turnout would be broadly in line with the last election five years ago, at close to 80 per cent.

The first-round result will give French voters a clear choice. Mr Macron has positioned himself as an socially liberal, enthusiastic European, and has called for economic deregulation. Ms Le Pen has said she would slash immigration, return to the franc and reject international treaties.

The ballot was held amid high security, with about 50,000 police officers deployed throughout the country, helped by municipal staff. France has been under a state of emergency since November 2015 following several deadly terrorist attacks.

Tension further increased after a lone-wolf attacker killed a policeman and wounded two others during a shooting on the Champs-Élysées in Paris on Thursday evening.