Oppose candidates who back Brexit at any cost, Blair urges 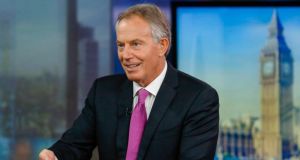 Tony Blair: MPs should “keep an open mind on this Brexit negotiation until we see the final terms”. Photograph: Luke MacGregor/Bloomberg

Tony Blair has urged voters to oppose candidates who back “Brexit at any cost”, even if that means voting Conservative or Liberal Democrat. The former Labour prime minister said that, with polls pointing to a landslide victory for Theresa May, voters should put party allegiances aside.

“The absolutely central question at this general election is less who is the prime minister on June 9th and more what is the nature of the mandate, and in particular – because otherwise, frankly, this is a steamroller election – is it possible that we can return as many members of parliament as possible to parliament that are going to keep an open mind on this Brexit negotiation until we see the final terms,” he told the BBC.

“I will vote Labour, I would always vote Labour, and there are many excellent Labour candidates throughout the country. But that’s not the point for me. The point for me is, whether I’m Labour or I’m not Labour, even if there’s Conservatives or Liberal Democrats, I’ll work with anyone to get this argument across in the country.”

Mr Blair praised Ms May and declined to say if she or Jeremy Corbyn would make a better prime minister. Earlier Mr Corbyn cast doubt on Labour’s commitment to the Trident nuclear deterrent, said he would not authorise a nuclear first strike and expressed doubts about the wisdom of killing the leader of Islamic State in a targeted assassination.

Labour is currently committed to retaining Trident, but Mr Corbyn would not say if the commitment would be renewed in the party’s manifesto for June’s general election.

“I want us to achieve a nuclear-free world, to adhere to the nuclear nonproliferation treaty and take part in negotiations surrounding that,” he told the BBC’s Andrew Marr.

The Labour leader said he would call on Donald Trump to suspend air strikes against Bashar al-Assad’s forces in Syria and expressed caution about authorising a drone strike on the Islamic State leader, Abu Bakr al-Baghdadi.

“What is the objective? To have more strikes that would kill more possibly innocent people, or to get a political solution in Syria?” he said.

The Conservatives pounced on Mr Corbyn’s comments; the home secretary, Amber Rudd, said it was clear Labour would “refuse to strike against terrorists, dismantle our nuclear defences and fail to control our borders”.

A number of polls over the weekend showed a commanding lead for the Conservatives over Labour, and a Panelbase poll in Scotland for the Sunday Times suggested the Tories could capture up to a fifth of the Scottish National Party’s seats. The poll pointed to an 18-point surge of support for the Conservatives since 2015, giving the party a 33 per cent share of the vote, which could increase its Scottish seats from one to 10 or even 12. The poll puts the SNP on 44 per cent, predicting that the party could win 45 seats, 11 fewer than in 2015.