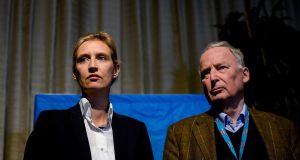 Alice Weidel and Alexander Gauland who were elected as the leading duo for AfD in the German general election. Photograph: Sascha Schuermann/Getty

Alice Weidel, an economist and consultant from the party’s western conservative-liberal wing, will front the Bundestag campaign alongside Alexander Gauland, of the party’s eastern nationalist branch.

Her appointment followed AfD leader Frauke Petry’s refusal to enter the race. Two years after she snatched the party leadership and pulled the AfD onto an anti-immigrant, anti-Islam path, Ms Petry was herself sidelined by delegates at the weekend conference in Cologne.

Instead the party has backed Ms Weidel, a rising star in the party with a CV that includes stations in Goldman Sachs, Allianz and six years in China.

Despite frenzied applause, the Weidel-Gauland appointment marks a ceasefire rather than a resolution of an underlying identity crisis within the AfD.

Ms Weidel, an AfD spokeswoman for economic affairs and a vocal critic both of the euro and euro bailouts, appealed to voters on Sunday to embrace the AfD as a corrective to the centrist course – and refugee policies – of Angela Merkel’s Christian Democratic Union (CDU).

But the liberal economist made a play, too, to the AfD’s nationalist wing, calling it a “scandal” that German Christmas markets have to be protected by armed police and concrete lorry barriers.

Ms Weidel has come under fire for her apparent contradictions between her private life – she lives with her partner and two sons – and loyalty to a party that propagates the “natural union” of father and mother as “the best for a child’s welfare”. The AfD party programme attacks sex education in schools and insists children must not become a “plaything for the sexual inclinations of a loud minority”. Challenged on this in interviews, Ms Weidel has drawn a distinction between her personal life and public political preferences.

After a riot on Saturday outside the Cologne conference hall, with 10,000 protesters and two injured police, some 600 delegates backed a programme positioning the AfD to the right of Chancellor Angela Merkel’s ruling Christian Democratic Union (CDU).

It calls for annual asylum deportation quotas, an end to family reunions and additional measures to boost Germany’s birthrate to “retain the state people”. It calls for deportation of criminal immigrants and a halt to Germany’s transition to renewable energy, disputing that carbon dioxide emissions pose a danger for the environment.

As a western AfD liberal, Ms Weidel faces a challenge counterbalancing Alexander Gauland, the wily 76 year-old who has defended eastern colleagues who relativise Adolf Hitler’s crimes and call for an end to post-war Germany’s “cult of guilt”.

“We’re often asked what we want,” Mr Gauland told delegates. “We want to retain the country we inherited from our mothers and fathers. We want our homeland, our identity and we are proud to be Germans.”