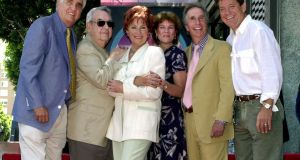 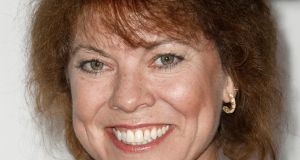 Erin Moran, the former child actor who played the sweet but mischievous Joanie on the television series Happy Days and Joanie Loves Chachi, has died. She was 56.

The Harrison County Sheriff’s Department in southern Indiana confirmed her death. She was found unresponsive on Saturday afternoon, and the authorities said an autopsy was pending.

Moran started acting when she was five and got her first taste of television in a commercial for First Federal Bank. She went on to play minor characters in television and film in the late 1960s and early 1970s.

At the age of 12, she landed her biggest role: Joanie, the freckle-faced troublemaker and sister of Richie Cunningham, the all-American teenager played by Ron Howard.

Over the 10-year run of Happy Days, Joanie transformed from the young teenager who complained about being sent to her room to a major character on the show. In later seasons, Joanie’s love interest with the aspiring musician Chachi Arcola became a major story line.

In 1982, the two characters were given their own show, Joanie Loves Chachi, a widely panned comedy that followed their romantic adventures and musical pursuits in Chicago. While Happy Days was a No 1 hit, the spinoff with Moran and Scott Baio, who played Chachi, lasted only 17 episodes.

The end of the show also ushered in a swift downfall for Moran’s acting career and her opportunities in Hollywood. She was only 22 when the show ended, but despite minor appearances on other shows, she never held another leading role.

After the shows were over, Moran opened up about the downsides of growing up on the screen and under the Hollywood spotlight. She said that shortly before her 15th birthday, producers on Happy Days began to pressure her to watch what she ate and to wear more revealing outfits. “They suddenly wanted me to lose weight and become this sexy thing,” she said in an interview in 1983.

In the mid-1980s, Moran swore off Hollywood and left Los Angeles for a home in the California mountains. In an interview with The Toronto Star in 1988, she said she suffered from depression after the two television series ended and acting offers dried up.

“I wanted time off to reassess my life and career,” Moran told the newspaper. “I had to ask myself, ‘Do I really want to keep doing this, or do I want to sit back and take it easy for five years, 10 years?’”

Erin Marie Moran was born in Burbank, California, on October 18, 1960, and raised in North Hollywood with five other siblings. She was the second youngest child of Sharon and Edward Moran. Her father was a finance manager. Her mother encouraged her acting career and signed her up with an agent when she was five.

Before playing Joanie, Moran played an orphan on the show Daktari and a daughter on The Don Rickles Show. Later in her life, she moved to Indiana with her second husband, Steve Fleischmann.

Howard, who is now a film director responsible for blockbusters including Apollo 13 and The Da Vinci Code, wrote on Twitter: “Such sad sad news. RIP Erin. I’ll always choose to remember you on our show making scenes better, getting laughs and lighting up TV screens.”

Winkler, who is best remembered as Happy Days heartthrob Arthur “The Fonz” Fonzarelli, wrote: “Oh Erin ... now you will finally have the peace you wanted so badly here on earth. Rest in it serenely now ... too soon.” – New York Times service and agencies