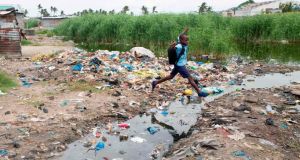 A young boy jumps across a stream as some roads have flooded after recent rains in the Praia Nova neighbourhood in Beira, Mozambique on February 26th. During cyclone Idai in 2019 most parts of the neighbourhood were completely flooded. Photograph: Karel Prinsloo/UNCDF/AFP via Getty

In Beira, central Mozambique, locals sleep looking at the stars. Twelve months have passed, but many still can’t afford to replace what was washed away. Rainy season is coming, and they worry.

Wednesday marks a year since Cyclone Idai was discovered off the coast of Mozambique. One of the worst tropical cyclones on record to hit Africa, it made landfall ten days later, devastating parts of the east African country, as well as regions in Malawi and Zimbabwe. Roughly 1,300 people died and millions were affected.

Beira’s mayor, Daviz Mbepo Simango, says the roughly half a million residents of the coastal city are still suffering the impact of what happened. “Most citizens lost their houses, especially the roofs,” he told The Irish Times.

“Windows, doors. We had a lot of flooding. The farmers lost their animals. The question was how to start recovering the city after that disaster. We are trying to do our best, that is what we are working on.”

Since the cyclones hit, Simango’s job has focused on raising money. He has been involved in international donor meetings, where “we mentioned some important areas like construction, housing, roads, sewage systems, waste management. At this stage now we have some funds for coastal protection”, he said.

An assessment after the cyclones determined that $3.2 billion (€2.87 billion) was needed for reconstruction in Mozambique alone; ultimately $1.5 billion was pledged by countries including Ireland. On top of that, $600 million was requested by the UN for humanitarian aid, of which it received about $300 million.

These sums highlight the massive cost of climate change.

“Mozambique is one of the most vulnerable countries to climate change,” said UN humanitarian co-ordinator for Mozambique, Myrta Kaular. “It has a very long coastal area facing the Indian Ocean and has many rivers crossing it from east to west, and these can flood very much. [This] has a lot of people-made causes because there is a a very high level of deforestation due to poverty.”

Cyclones were cyclical, she noted, and a big one could easily hit again. “This year we’re experiencing rains in the north and drought in the south. The climate is really a very big enemy for sustainable development in Mozambique. The vulnerability of the people is still very high.”

Mozambique is a poor country of about 30 million. There is a worsening Islamist insurgency in the north, while elections in October were marred by violence and allegations of vote rigging.

Simango, Beira’s mayor, accuses the government in Maputo of not helping fast enough after Idai hit because Beira is an opposition stronghold. Residents are still terrified about a recurrence, he said.

“Once the gate is open it can be open any time. We are aware of that so we are preparing an evacuation map, we’re building safe houses for the people so they can stay [here],” he said.

Business is slowly returning to the city, Simango said, though many people still struggle. “We have people who don’t have anything. Some are old, some are children, some are unemployed. People were trying to save money for different interests and now they need to use it to rebuild their houses. People are delaying preparing for their future.”