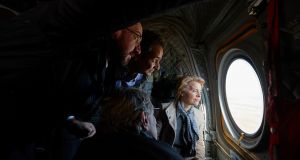 European Union leaders have given a show of support for Athens, describing Greece as Europe’s “shield” in deterring migrants, despite questions from the UN about breaches of international refugee law.

Four EU leaders met the Greek prime minister, Kyriákos Mitsotákis, at the border town of Orestiada on Tuesday, near where Greek police have been using teargas to deter hundreds of migrants from attempting to cross from Turkey.

European Commission president Ursula von der Leyen said: “This border is not only a Greek border, it is also a European border ... I thank Greece for being our European aspida in these times,” which was translated as “shield”.

Croatia’s prime minister, Andrej Plenkovic, echoed her words: “Greece is now the shield, the real external border of the European Union and the guarantor of stability for the entire European continent.”

The EU visit came amid an escalating war of words between Athens and Ankara, after Turkey’s foreign minister said – without providing evidence – that Greek soldiers had killed three migrants attempting to enter the country, a claim denied by Greece.

The EU is battling to save its 2016 migration pact with Turkey, after the Turkish president, Recep Tayyip Erdogan announced on Saturday he was “opening the doors”, saying Turkey could no longer handle refugees fleeing from Syria.

On Monday, Mr Erdogan said Greek forces had killed two migrants and wounded a third one, something Greece angrily denied.

“We dismissed this as misinformation yesterday via our government spokesman. How can there be a third fatality when there weren’t any at all yesterday?” a Greek foreign ministry spokesman said.

Mr Mitsotákis said Turkey had become “the official trafficker of migrants to the European Union” and was using “desperate people to promote this geopolitical agenda and to divert attention from the horrible situation in Syria”.

He said tens of thousands of people who had tried to enter Greece since the weekend had not come from Idlib, but had been “living safely in Turkey for a long period of time”.

The claim was partly supported by the UN high commissioner for refugees, Filippo Grandi, who said that few, if any, of those arriving in Greece were from north-west Syria.

But the UN refugee agency has questioned Greece’s decision to suspend all asylum applications for one month.

In an implicit rebuke to Athens, the UNHCR said there was no legal basis for suspending asylum decisions in either the 1951 UN refugee convention or EU law. “Persons entering irregularly on the territory of a state should also not be punished if they present themselves without delay to the authorities to seek asylum,” the UNHCR said.

Campaigners at Oxfam said the Greek decision was gravely concerning. “It is reminiscent of the disastrous lack of leadership in 2015/2016 when no government in Europe wanted to take responsibility for people in need,” said Oxfam’s Europe migration campaign manager, Evelien van Roemburg.

An EU official said it was not clear whether Greece had broken EU asylum law: “It really is a job for the lawyers [to assess]. We are facing a very specific situation at the border.”

The UNHCR also urged the EU to stop bickering over a long-stalled reform of EU asylum law, which the bloc has been unable to agree since the last migration crisis subsided in 2016.

Mr Mitsotákis said the EU had “not used the time wisely since the last migration crisis to address the situation effectively”, adding it was “about time” the EU agreed on “effective burden sharing” – meaning asylum seekers would be dispersed around the bloc, not left in frontline countries.

In a barely-concealed dig at governments such as Hungary, which has flatly refused to take in refugees, he said: “We cannot afford to have that many free riders within the European Union who pass the burden of managing the external borders to those countries who by virtue of geography happen to be placed where they are … while at the same time not assuming any responsibilities in terms of managing this problem internally.” – Guardian

1 Irish tourists excluded from visiting Greece and Croatia
2 Taoiseach has confirmed schools will reopen at the end of August
3 Quarantine will cease within fortnight, Ryanair CEO claims
4 Higgins: ‘This is very, very different to 2008 ... we need radical thinking’
5 Derek Chauvin charged with murder in connection with death of George Floyd
Real news has value SUBSCRIBE