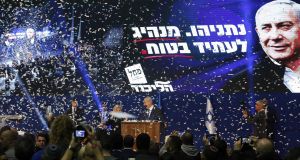 Israeli prime minister Binyamin Netanyahu emerged as the big winner from Monday’s general election, but it may be a couple of days before he knows if he will have the support of 61 Knesset members in order to form a majority government.

With almost all of the regular votes counted in the country’s third election in 11 months, Mr Netanyahu’s right-wing Likud emerged as the largest party with a projected 36 seats – four more than the centrist Blue and White. However, the support of other right-wing parties could still leave him two short of a majority, on 59 seats in the 120-seat Knesset.

The envelopes containing the votes of soldiers and diplomats will be counted after the regular votes, along with the votes from people in home quarantine due to the coronavirus, who were forced to vote at designated voting centres where staff wore protective gear.

Likud hopes the soldiers’ votes will give their bloc an extra seat.

As Mr Netanyahu started negotiations with likely coalition partners on Tuesday, feelers were also put out to other lawmakers in an effort to persuade them to defect and join a Netanyahu-led government. Israeli media was rife with speculation over the identity of the potential defectors and which plum ministerial portfolios they may be offered in order to cross the aisle.

The stakes are high. In his victory speech to the Likud faithful in the early hours of Tuesday, Mr Netanyahu promised to extend sovereignty to West Bank settlements and annex the Jordan Valley, the eastern strip of the West Bank. But, in order to do this, he has to cobble together a government.

Other options for Mr Netanyahu to end the deadlock in Israeli politics include forming a minority government; some kind of unity government with Blue and White; persuading Yisrael Beiteinu, led by his one-time ally but now rival Avigdor Lieberman, to bury the hatchet and join the coalition; or fourth elections inside a year.

Each scenario is problematic, however, not least because Mr Netanyahu is due to appear in court later this month at the start of his corruption trial in what will be the first prosecution of a sitting Israeli prime minister.

“A person accused of criminal charges, in particular serious charges such as bribery, fraud and breach of trust, cannot be seen as fit to take upon himself the role of forming a government,” the group said in a statement.

“It is inconceivable for a prime minister to spend the morning in court, and in the evening preside over the security cabinet,” said Eliad Shraga, the group’s chairman.

Monday’s election resulted in a best-ever showing for the predominantly Arab Joint List, which is projected to win 15 seats. Traditionally, turnout amongst Israeli Arabs, who represent 20 per cent of the country’s population, is low in comparison to Jewish Israelis.

But this time they came out in record numbers, and one reason was undoubtedly their strong opposition to the US Middle East peace plan, which called for redrawing the West Bank border to relocate a number of Israeli Arab towns inside Palestine.