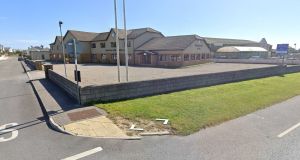 The direct provision centre, which will provide independent living facilities for up to 100 people, will be located at the site of the former Rosslare Port Lodge Hotel (above). File photograph: Google Street View

A new direct provision centre will be opened in Rosslare for asylum-seekers who had been accommodated in emergency facilities near the port, the Department of Justice has confirmed.

The centre, which will provide independent living facilities for up to 100 people, will be located at the site of the former Rosslare Port Lodge Hotel.

The hotel was put up for sale with vacant possession in October of last year, with a price of €800,000 sought. The Department of Justice said the premises was offered to it following a nationwide call for suitable properties.

A spokesman for the Department said asylum-seekers who had been accommodated in a hotel, the Hotel Rosslare, will be moved to the new facility, which will provide dedicated independent living facilities for up to 100 people, in the coming weeks.

A consultation process will be run with locals in the interim. “The Department is endeavouring to provide the local community with as much information as possible. A meeting has been arranged between Department officials and local representatives from the Rosslare municipal district tomorrow [Tuesday] to discuss what supports will be in place to facilitate the new accommodation centre and its residents,” a spokesman said.

“In line with successful models around the country, a ‘friends of the centre’ group will be established.”

The facility is to be managed by a company called Codelix Ltd. The shareholders of the company are two individuals based overseas. The premises will have a dining area, recreational spaces and an onsite laundry. Applicants who are resident there will be able to access a range of State services and supports, including healthcare, education and childcare on the same basis as other service users, the Department said.

In the last year, the opening of new direct provision centres has proved controversial among community organisations, while the use of hotels for the purpose has also attracted criticism over the accommodation provided.

The Department of Justice was forced to turn to private hotel operators to provide emergency accommodation because the number of people arriving to seek international protection in the State increased significantly year-on-year, with a 40 per cent increase last year.

As a result, there are currently more than 1,600 people accommodated in hotels and guesthouses on an emergency basis. The Department has been running procurement competitions to find new premises across eight regions throughout Ireland. It is hoped that as new centres come on stream, the requirement for emergency accommodation will be reduced.

However, plans to open several new centres had to be abandoned last year amid campaigns of resistance. In some instances, often disowned by those protesting, violent tactics were deployed, such as arson at a hotel in Rooskey, Co Leitrim, and the burning of a car belonging to Sinn Féin TD Martin Kenny, who had supported a proposal to accommodate asylum-seekers in Ballinamore, Co Leitrim.

Two men arrested after raid on bookmakers foiled by pensioner 16:26
Moving Luke Kelly sculpture suggested as response to vandalism 16:23
Police officer ‘kicked in the face’ while clearing crowd from beach 15:30
Irish tourists excluded from visiting Greece as country begins its tourism season 15:07
Firefighters battle to keep forest fire away from an explosives factory 14:55