EU on guard as China builds infrastructure and influence 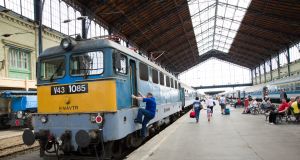 A century after the end of the first World War and the collapse of the Austro-Hungarian empire, trains still rumble in and out of Nyugati station in Budapest.

Opened in 1877, it served not only as an important junction in a vast imperial rail network but as a commercial and stylistic link to western Europe, having been designed and built by the firm of Frenchman Gustave Eiffel, of Parisian tower fame.

Like much of the transport infrastructure of central Europe and the Balkans, Hungary’s rail system now requires costly modernisation, but today the region’s governments increasingly look to the east for answers.

China has pledged to spend about $1 trillion (€885 billion) on its so-called Belt and Road Initiative (BRI), a vast portfolio of projects aimed at transforming its links with Africa, the Middle East and Europe along the ancient Silk Road and other trade routes – and Hungary and its neighbours are keen to cash in.

Beijing’s multibillion-euro plans for the poorest corner of Europe envisage the upgrade or construction of ports, motorways, bridges and train lines, including the creation of a high-speed railway between the capitals of Hungary and Serbia.

The Budapest-Belgrade line is intended as a flagship project, which proves that China is able to meet EU construction standards and legislation laid down by Brussels to ensure fair competition and prevent corruption in member states.

As Beijing eyes an eastern entryway to the lucrative markets of western Europe, however, the EU is pushing back against possible dangers posed by an authoritarian superpower with extremely deep pockets and a different set of rules.

“There are several interests for China” in the BRI, says Jonathan Hillman of the Centre for International and Strategic Studies in Washington.

“China has huge construction companies that have built so much at home that they need to go abroad to find other places to do projects. More broadly, it also has a long-term interest in seeing that as more projects are completed, Chinese commercial standards will become accepted more widely,” he told The Irish Times.

“It is also an opportunity for diplomatic influence . . . that stems in part from China’s existing investments and from the promise of future investment.”

Hungary and Greece, two countries with high hopes for such co-operation, succeeded in softening a 2016 EU statement on Beijing’s role in the disputed South China Sea, to the point where China was not even mentioned in the final text.

China really needs the EU for economic and geopolitical reasons and it’s not in its interests to undermine EU unity . . .

As the EU struggles to stop the likes of Hungary, Poland and Romania eroding the rule of law, and corruption continues to blight the bloc’s eastern fringe and Balkan aspirants, Brussels fears that China’s growing role in the region could weaken its own influence and embolden unscrupulous politicians and businessmen.

Hungary’s government fuelled such concerns by initially pushing ahead with its leg of the new Budapest-Belgrade railway without publishing any contracts or tenders for a €1.8 billion project that is funded by Chinese loans.

EU complaints forced Budapest to rush through a quick-fire tendering process, from which two Chinese-Hungarian consortiums emerged as bidders, but the dispute raised questions about the real rationale behind the costly project.

“China would like to have new routes to reach western European markets, and it would like to diversify its trade routes,” says Agnes Szunomar, a China expert at the Hungarian Academy of Sciences.

“China controls the Greek port of Piraeus and would like to connect that to western Europe through the Balkans and Hungary, so the rail line fits that plan.

“For Hungary, on the other hand, there is no economic rationale whatsoever. Hungary is not in dire need of this railway, but for the government it is another step to make China-Hungary relations more friendly,” Szunomar explains.

“It is all about the political rationale – to use this relationship as a bargaining chip if we have political tensions with Brussels. The same is true for Hungary’s relations with Russia. ”

Beijing discusses economic co-operation with central and eastern Europe states at their annual “16+1” summits, but Szunomar believes the EU would be wrong to see the forum as part of a Chinese bid to divide the bloc.

“China really needs the EU for economic and geopolitical reasons and it’s not in its interests to undermine EU unity . . . but China doesn’t know a lot about the EU and its procedures, so sometimes situations like that with the Budapest-Belgrade railway can happen,” she explains.

Some in Europe see China’s interests as far from benign, however.

EU enlargement commissioner Johannes Hahn has warned about importing the Asian giant’s “combination of capitalism and political dictatorship”, and warned that Beijing-funded projects could create Chinese “Trojan horses” inside the bloc.

As an example, he cited Montenegro’s decision to borrow heavily from Beijing to finance construction of a major motorway, which has sent the small Adriatic state’s debt soaring and left it unable to fund completion of the project.

Analysts say several Asian and African nations already face a similar “debt trap”, and the prospect of having to give control of infrastructure such as ports and airports to Beijing in lieu of liabilities – a danger US-vice president Mike Pence flagged up this month when deriding China’s “constricting belt” and “one-way road”.

The EU’s main concern is not Beijing’s role in building Balkan roads and railways, however, but its keen interest in high-tech sectors in western member states, where China’s investments vastly outstrip its spending further east.

If it’s clear that there is a predatory attack on a particular sector, the EU commission can advise a member state to block it

Whether acquiring German robotics firm Kuka, taking a major stake in British nuclear power plant Hinkley Point or the firm that makes Peugeot and Citroen cars, China’s companies are part of the state’s drive to upgrade its industry and boost its global economic clout.

In response, the EU and individual member states are now increasing their scrutiny of potential investments from China and other foreign powers.

A new EU screening process “allows member states to see whether a country like China is targeting sensitive sectors like robotics or telecommunications, and see what it is doing in other member states”, says Fraser Cameron, director of the EU-Asia Centre in Brussels.

“If it’s clear that there is a predatory attack on a particular sector, the EU commission can advise a member state to block it. The state has the final say, so it’s not as tough as the American screening process, but it’s a first step in that direction.”

Experts urge Brussels to keep the challenge from the east in perspective, however: EU investment across the bloc still dwarfs that from China, and member and candidate states are growing cautious about the debt risks of Beijing-funded projects and their tendency to be tied to contracts for Chinese rather than local firms.

“China hasn’t been able to just walk in and gain contracts because it has to deal with EU competition policy, and the initial romance has cooled down considerably,” says Cameron.

“It’s a learning process for both sides.”