British Prime Minister Theresa May repeatedly refused on Friday (November 16) to rule out allowing her senior ministers to get a so called free vote, which allows lawmakers to vote against the wishes of their party, on the draft Brexit deal. LBC 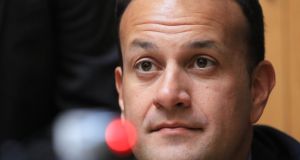 Leo Varadkar: “If you start trying to amend it or unpick it you might find that the whole thing starts to unravel.” Photograph: Nick Bradshaw

Taoiseach Leo Varadkar has said there is “not much room for renegotiation” of the Brexit deal.

Mr Varadkar also said it will be “very difficult” to avoid a hard border if there is no withdrawal deal in place when the UK leaves the EU next March.

“If you start trying to amend it or unpick it you might find that the whole thing unravels,” Mr Varadkar said of the withdrawal agreement struck this week. However, UK prime minister Theresa May faces a struggle to get the deal through the House of Commons.

Mr Varadkar said it will be difficult to avoid a hard border if no exit arrangement is in place when Brexit takes effect. It is the first time the Taoiseach has effectively acknowledged border infrastructure could return.

“I think in a no deal scenario it would be very difficult to avoid a hard border,” he said. “As Ireland remaining part of the European Union, we would no doubt be required to implement European law and the United Kingdom, having left the European Union, would seek to join the World Trade Organisation and they would have to implement World Trade Organisation rules.”

The Taoiseach was speaking at a housing launch in Dublin on Friday.

“So those hard Brexiteers who say that somehow just through good political will you can avoid a hard border, that doesn’t make sense. Are they really saying that they would join the WTO and the first thing they would do would be to refuse to implement the WTO rules?

“Are they really saying to us that we would stay in the European Union and not protect the single market? The only way we can avoid a hard border is by an agreement, an agreement that covers customs and regulations. We have that now.”

Meanwhile, Mrs May has appointed Stephen Barclay, a pro-Brexit health minister, as her new Brexit secretary.

He replaces Dominic Raab, who resigned on Thursday in protest at the Brexit deal. But Mrs May will take charge of Brexit talks, stripping the Brexit department of the role entirely.

The Government declined to comment on UK media reports that a group of pro-Brexit ministers in Mrs May’s Cabinet are planning to meet in the coming days to renegotiate the mechanism by which the UK could exit the fall-back “backstop” option to avoid a hard border post-Brexit.

Sky sources: All government whips have been told to cancel any engagements today and return to London as a source close to the whip's office says a no confidence vote in the Prime Minister is now "likely"

UK environment minister Michael Gove along with other anti-EU ministers – trade secretary Liam Fox, international development secretary Penny Mordaunt, transport secretary Chris Grayling and leader of the House of Commons Andrea Leadsom – were reported to be convening a meeting next week to discuss concerns over Mrs May’s deal. The cabinet approved the draft agreement after a five-hour meeting on Wednesday.

The Government spokesman noted the Taoiseach’s support for Mrs May on Wednesday night when Mr Varadkar said people have consistently underestimated her mettle and courage.

Pro-Leave cabinet members have met in the past to discuss their concerns about a proposed deal with the EU. Preparations for the meeting were reported by multiple UK news outlets, including the BBC, the Guardian and Bloomberg.

Irish Government sources said the UK ministers were contesting something that the cabinet had already approved.

“This is something that we kind of expected,” said an Irish official. “They have to work it out internally over there. The agreement is done. The cabinet signed off on it. Whatever internal politics has to play out, we are going to let that play out.”

Pro-Brexit supporters within Mrs May’s Cabinet and the Conservative Party object to the EU having a veto over the UK in any review of the backstop or any British push to exit the mechanism.

Dominic Raab, who resigned as UK Brexit secretary over the withdrawal deal, had demanded the right for the UK to withdraw unilaterally from the backstop. But the EU and Irish Government rejected this.

The final draft withdrawal agreement, approved by EU and UK negotiators, included a mechanism where a joint committee comprising EU and UK officials and co-chaired by both sides, would decide jointly whether the backstop, in whole or in part, was no longer necessary.

The agreement says that the committee may, while deciding on a request to end the backstop from either side, may seek an opinion from institutions created under the 1998 Belfast Agreement.

Earlier, Mr Gove insisted he still has confidence in the prime minister after deciding he will stay in her cabinet. His expression of support comes as former home secretary Amber Rudd is set for a return to cabinet as work and pensions chief, according to Sunday Times reporter Tim Shipman.

Ms Rudd would succeed Esther McVey who resigned on Thursday. Ms Rudd resigned last April over the mistreatment of the Windrush migrants, or rather a false statement about the policy behind it.

Following the resignation of four ministers in the wake of her poorly-received Brexit deal on Thursday, speculation was rife that the departure of the most senior Leave campaigner in her cabinet could deal a damaging blow to the prime minister.

But Mrs May faces mounting pressure from within Tory ranks as further MPs called for her to be ousted.Mr Gove was asked if he had confidence in the prime minister and replied: “I absolutely do. I am looking forward to continuing to work with all colleagues in government and in parliament to get the best future for Britain.”

Mr Gove would appear to have thrown a lifeline to Mrs May by staying in government. She told LBC radio “a very good conversation” had taken place with Mr Gove on Thursday, but declined to say what they had discussed, other than the future of the fishing industry after Brexit. She said Mr Gove had been doing “a great job”.

Sources indicated that the number of no-confidence letters submitted to chairman of the backbench 1922 Committee Sir Graham Bradymay now be nearing the 48 needed to trigger a vote.

The PM denied that she had had a “testy exchange” over Brexit with Democratic Unionist Party leader Arlene Foster. The DUP props up her Tory minority administration in the Commons.

But she left no doubt she was aware she cannot guarantee DUP support when Brexit comes to the Commons, saying: “Every individual MP will decide how they will vote, whether they are DUP, Conservative, Labour. ”

He told Today a “unity platform” was emerging at Westminster to avoid the “catastrophic” impact of a no-deal break with the EU. – Press Association