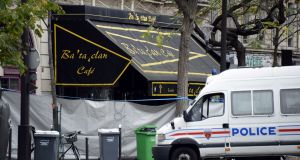 The cordoned-off Bataclan concert hall in Paris, November 16th, 2015. The “Beyond Chaos: In the Aftermath of the Arab Upheavals” launch occurred on the third anniversary of the massacres. Photograph: Bertrand Guay/AFP/Getty Images

When the French academic Gilles Kepel went to Damascus to study Arabic in 1977, the two most salient features of the Middle East were the Arab-Israeli conflict and the superpower rivalry superimposed upon it.

The region has changed utterly. The confrontation between Sunni and Shia Muslims presents the greatest risk of major conflagration, while Sunni Islam has fragmented. After being sidelined for two decades, Russia is back as a regional power broker, due to the civil war in Syria. And the Israeli-Palestinian conflict has been marginalised.

Prof Kepel, chairman of Middle East and Mediterranean studies at École Normale Supérieure, presented his new book, Beyond Chaos: In the Aftermath of the Arab Upheavals, at the Paris campus of Columbia University on Tuesday night.

The book launch occurred on the third anniversary of the Bataclan massacres which killed 130 people in Paris and St Denis. Kepel noted how much jihadism evolved between the atrocities of September 11th, 2001, and 2015. In the intervening years, a veritable “jihad system” arose between the Levant and Europe. The Bataclan massacre was its apex. “These were Arab kids from Europe who had gone to the Levant because they wanted to kill infidels and apostates.”

Islamic State (also known as Isis) killers were the “third generation” of jihadists, weaned on the doctrine of Abu Musab al-Suri, who preached Nizam, la Tanzim, or “System, not Organisation”. Islamic State militants sought easy targets close to home, as opposed to earlier spectacular attacks staged by al-Qaeda on the “far enemy”, such as the destruction of the twin towers.

Since the fall of its capital, Raqqa, in October 2017, Islamic State “has lost its capacity for operations”, Kepel said. “But when we talk to jihadists in jail, watch what they say on websites or conduct interviews in the banlieues, sympathy for those groups is not decreasing.”

The jihadist attacks of recent years in Europe revealed “what we did not see when we looked at the Arab Spring”, Kepel said. The founding events of the Arab revolts, the self-immolation of Mohamed Bouazizi in Tunisia on December 17th, 2010, and the fall of the Egyptian ruler Hosni Mubarak the following February, took place in winter, not spring.

Westerners failed to put the Arab Spring in historical and cultural context, Kepel continued. “It was seen as, ‘Suddenly the Arabs are becoming democrats.’ It was seen as the end of authoritarianism and jihad. They were like us. People lost patience with Arabists. They could go into retirement.”

Kepel recalled a dinner at the home of an Egyptian general at the beginning of the Tahrir Square demonstrations. “The maître d’hôtel was dressed as in King Farouk’s time. They served shrimp in bechamel sauce. It was so obsolete. I didn’t take seriously what the general told me. He said, ‘We are going to let the Muslim Brothers win. We are going to expose their stupidity and they will bring us [military] back.’”

The French academic thought so little of the general’s predictions that he did not include them in the book he was writing. President Mohamed Morsi, the leader of the Muslim Brotherhood who was elected in the wake of the Arab Spring, was overthrown by Marshal Abel-Fattah al-Sisi in July 2013. “That was exactly the general’s script,” Kepel says.

Prof Safwan Masri of Columbia University, author of Tunisia: An Arab Anomaly, explained why that country emerged better from upheaval, with democratic elections and a system of powersharing. “Civil society saved the day,” Masri said. “Civil society is almost non-existent in the rest of the Arab world. In Egypt, it is controlled by the government. In Jordan, it is under the patronage of the royal family. In Palestine, it has been crushed.”

The murder of the Saudi journalist Jamal Khashoggi “has brought into our consciousness things we swept under the rug”, Masri said. “There were 48 beheadings in Saudi Arabia in the first four months of this year, 600 executions since Mohamed bin Salman began his rise to power. The Yemen war, the famine there . . . The world has started to pay attention.” Masri nonetheless believes MBS’s hold on power is secure, though one won’t be certain until his father, King Salman, is gone.

When the session was opened to questions, a dignified, elderly Palestinian man stood up. “I am 85 years old,” he said. “I think about Palestine 20 hours a day. In my mind there is a plan, a conspiracy, the ‘deal of the century,” he said, referring to US president Donald Trump’s claim that he will broker such a “deal” between Israel and Palestine.

No one in the audience seemed terribly interested. The old man’s comments were “an important reminder that if we had been speaking before 9/11, this conversation would have been dominated by Israel-Palestine”, said the moderator, journalist Christopher Dickey. “We have talked most of this evening without even mentioning it.”