Donald Tusk, President of the European Council, visis 7 countries of the Western Balkans route and Turkey to continue building a European consensus on how to handle the migration crisis. Video: EU Council 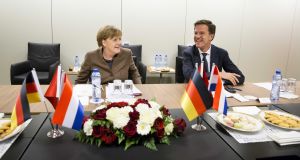 German chancellor Angela Merkel and Dutch prime minister Mark Rutte at the Turkish embassy in Brussels, Belgium, ahead of an EU-Turkey summit on the migration crisis. Photograph: Bart Maat/EPA

EU leaders gather in Brussels today for a key summit on the refugee crisis amid mounting concerns that Europe could be on the brink of a humanitarian disaster.

With more than 30,000 migrants trapped in Greece as countries close their borders, leaders will seek to strike a deal with Turkish prime minister Ahmet Davutoglu on reducing the number of migrants entering through Turkey.

At least 25 migrants died yesterday in the Aegean Sea after a boat going from Turkey to Greece capsized near the Turkish resort of Didim.

Today’s EU-Turkey summit, which will be attended by Taoiseach Enda Kenny, is being seen as a crucial test of the union’s ability to deal with a refugee crisis that has overwhelmed EU states and left the free movement policy in tatters.

From the Turkish perspective, securing a commitment from the EU to speed up talks on visa liberalisation for Turkish citizens is likely to be a key demand, despite continuing resistance from a number of states.

While Germany has been driving the EU’s policy response to the refugee crisis, advocating greater engagement with Turkey, German finance minister Wolfgang Schäuble said yesterday that Germany had “major doubts” about whether Turkey should ever be a full member of the EU.

The issue is likely to be a contentious one for Britain ahead of a referendum on EU membership in June, amid concerns from some Eurosceptics that granting easier access for Turkish citizens to the Schengen free travel area could affect immigration into Britain from Turkey.

In a statement on Saturday, the EU said Turkey, “needs to respect and promote high democratic standards and practices, including freedom of the media”.

“Free, diverse and independent media constitute one of the cornerstones of a democratic society,” the statement said.

Speaking yesterday in Brussels, the head of Alde, the liberal group in the European Parliament, accused the EU of “selling its soul” by signing up to a deal with Turkey, denouncing the return of migrants to a country “which imprisons journalists, attacks civil liberties and with a highly worrying human rights situation”.