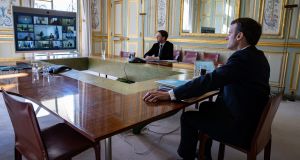 French President Emmanuel Macron attends a video conference call with members of the European Council to debate the coordination of EU efforts to tackle the Covid-19 epidemic. Photograph: Ian Langsdon/EPA.

European Union leaders failed to agree on a coronavirus stimulus package, giving themselves two more weeks to work out details.

Highlighting how the pandemic is testing the bloc’s cohesion, Germany and the Netherlands blocked a call from Italy, Spain and France to issue joint debt to help finance a recovery.

All 27 national EU leaders wrangled during a six-hour videoconference over setting up a credit line worth some 2 per cent of their economic output from the European Stability Mechanism bailout fund of the 19-member single-currency zone.

In the end, they tasked their finance ministers to work out the details in the next two weeks.

“Some member states ... suggested those corona bonds,” German Chancellor Angela Merkel said after the discussion ended. “We said that this is not the point of view of all member states. And that’s why the ESM is the preferred instrument for me.”

Her ally Dutch Prime Minister Mark Rutte said the ESM would be the “last resort”, would still need to come with conditions and that The Hague would not back joint debt.

The ESM said the standby credit to euro-zone governments could be available for up to two years and would have to be repaid within an average period of five to 10 years.

Italy, the European country that is hardest hit by the coronavirus, led the push for virtually unlimited support for its ravaged economy.

Since the respiratory disease arrived in Europe after originating in China late last year, the EU has struggled to present a united front on economic stimulus, the sharing of medical equipment and safeguarding of essential supplies after countries across the continent tightened or closed their normally open borders to try to curb the spread of the outbreak.

European Council President Charles Michel, who chaired the summit, has called for a new “Marshall Plan” - named after the US aid package that kick-started Western Europe’s recovery after World War Two.

But the 27 national capitals were divided, with Germany and the Netherlands saying the crisis could last into May and that the EU needed to keep some tools to step in later if needed.

“We cannot repeat the mistakes of the 2008 financial crisis, which sowed the seeds of disaffection and division with the European project and provoked the rise of populism. We need to learn this lesson,” said Spanish Prime Minister Pedro Sanchez.

The bloc has already suspended state aid rules and limits on public borrowing to allow member states to spend freely to cushion the economic hit. The European Parliament on Thursday approved €37 billion worth of emergency funds and measures to help airlines.

Germany and its allies say all EU states can still finance themselves on the debt market, and the European Central Bank has announced emergency bond purchases to put €750 billion into circulation.

The ECB has also ditched a cap on how many bonds it can buy from any single euro-zone country, which some EU states welcomed as lowering the pressure on governments to act now.

EU leaders agreed, however, to shield their strategic healthcare and infrastructure firms from foreign hostile takeovers amid the pandemic. But they sparred over medical equipment shortages and emergency border curbs that have caused traffic backups in what normally is Europe’s zone of free travel.

Europe marked the 25th anniversary of the open-border Schengen agreement on Thursday with its internal frontiers shut or subject to emergency checks, slowing deliveries of goods.

Italy has reported more than 80,000 infections and 8,160 deaths from the coronavirus. After the bloc initially left the country to fend for itself in the outbreak, Rome secured protective equipment from China and Russia, the EU’s geostrategic rivals, rather than its peers.

“What’s at stake is the survival of the European project,” French President Emmanuel Macron told his EU counterparts.

A further three deaths and 1,167 new Covid-19 cases have been reported in the Republic

1 Travellers call on comedian Des Bishop to apologise for ‘absolutely appalling’ comments
2 One hundred Irish retailers for all your online Christmas shopping
3 A further three deaths and 1,167 new Covid-19 cases have been reported in the Republic
4 Martin only told of contact tracing problem when texted Irish Times story
5 Covid-19 restrictions in Europe: how does Ireland compare?
Real news has value SUBSCRIBE