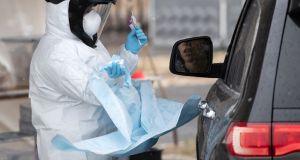 A nurse dressed in personal protective equipment prepares to give a coronavirus swab test at a drive-through testing station in Stamford, Connecticut. Criminals across Europe are exploiting shortages of masks, respirators, and other essential medical equipment for illicit profit. Photograph: John Moore/Getty Images

Criminals across Europe are exploiting shortages of masks, respirators, and other essential medical equipment for illicit profit as countries scramble to contain the coronavirus pandemic.

In the Netherlands this week, police arrested a man and a woman both aged 27, who are suspected of attempting to defraud hospitals of “millions of euro” by offering a large delivery of facemasks that “probably did not exist”.

In one scam, criminals call victims pretending to be from a hospital, inform them that a relative has fallen ill and demand payment for medical treatment.

“Criminals are exploiting the fear and uncertainty created by Covid-19 to prey on innocent citizens who are only looking to protect their health and that of their loved ones,” said Interpol sgcretary General Jürgen Stock.

“Anyone who is thinking of buying medical supplies online should take a moment and verify that you are in fact dealing with a legitimate, reputable company, otherwise your money could be lost to unscrupulous criminals.”

Reports of coronavirus-related fraud in Britain has risen by 400 per cent this month, according to police, after 21 such reports were received in February. Some victims received false emails purporting to be from the Centre for Disease Control and Prevention (CDC) and World Health Organisation (WHO) that tricked recipients into giving a donation or revealing their passwords.

Other frauds involved the soliciting of payment in return for updates about the pandemic, and promotion of fake investment schemes “encouraging people to take advantage of the coronavirus downturn”.

The majority of cases in Britain, however, related to online scams offering face masks for sale. One victim who attempted to buy them was conned out of £15,000 (€16,400) ; in total, victims have lost £800,000 in a month, according to police figures.

“Fraudsters will use any opportunity they can to take money from innocent people. This includes exploiting tragedies and global emergencies,” said Supt Sanjay Andersen, Head of the National Fraud Intelligence Bureau.

“The majority of scams we are seeing relate to the online sale of protective items, and items that are in short supply across the country, due to the Covid-19 outbreak. We’re advising people not to panic and to think about the purchase they are making. When you’re online shopping it’s important to do your research and look at reviews of the site you are buying from.”

Chinese aid Meanwhile, intrigue has broken out over how Chinese aid intended for Italy turned up in a warehouse in the small town of Lovosice in the Czech Republic.

The story came to light after Czech authorities announced they had seized 680,000 masks and 28,000 respirators from “speculators”, who had attempted to force steep price rises on the health service.

Media images showed some of the seized boxes bore Chinese and Italian flags, and the Czech government later announced that among the seized goods were 110,000 masks sent as aid from China to Italy. It quickly organised for replacements to be sent on a bus to Rome.

“I am delighted that we have been able to send a replacement to Italy for the Chinese gift, which for unknown reasons has appeared in the Czech Republic. I am sorry for what happened,” the Czech foreign affairs minister Tomas Petrícek said.

Subsequent to that the incident, the Italian airforce sent a C-130J military transport plane to collect a shipment of 16 ventilators procured by the non profit organisation Hope Onlus from Dusseldorf in Germany.

“Moving them over land was too risky, including for possible thefts,” founder Elena Fazzini told Corriere della Sera.