Elizabeth Canavan of the Department of the Taoiseach has said said that the Government is preparing to provide temporary morgue facilities in anticipation of a surge of the coronavirus pandemic. Video: RTE News Now 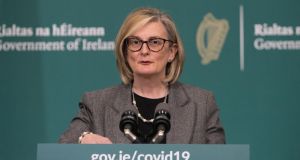 Liz Canavan, assistant secretary to the Department of An Taoiseach, speaks to reporters at Government Buildings. Photograph: Collins

The grounds of the Royal Hospital in Kilmainham has been identified as a site of one of the temporary mortuary facilities that will be set up in the event of a large surge of the Covid-19 pandemic.

The Government disclosed on Thursday it was preparing for the wider consequences of a surge, including the provision of field hospitals to provide additional medical capacity, and the deeply sensitive issue of temporary mortuary facilities.

“We will at all times be guided and informed by the need for compassion and care for the families who will be affected,” said Liz Canavan, a senior official in the Department of an Taoiseach.

The Department later outlined further details: “We are working on this issue, including the provision of appropriate infrastructure and sites. One such site that has been identified to assist with temporary mortuary capacity is the grounds of the Royal Hospital in Kilmainham” it said in a statement

In the past two years, the lack of suitable mortuary facilities at Waterford University Hospital was highlighted, where it was asserted bodies were left decomposing because of cramped conditions and a lack of refrigeration.

Ms Canavan, an assistant secretary at the Department, is the official in charge of the Government’s Covid-19 response.

She said this week would be a crucial week in terms of Covid-19 in Ireland and the State was in the process of scaling up to conduct 15,000 tests a day on individuals.

The briefing was also told evening timetables of the Local Link bus services were being suspended. Drivers will be redeployed to collect and deliver groceries and medical supplies for old, sick and vulnerable people in their local communities.

Ms Canavan said 170 Irish citizens were repatriated from Western Australia, including a group of Irish medics.

She added the Government was currently trying to help over 2,000 Irish citizens in 86 countries who are seeking assistance to return to Ireland but said the problems still persisted.

“The situation is fast-moving and volatile. What we have seen in recent days is not only countries, but entire regions, close off airspace and ground airlines at short notice.

“Where commercial flights are still an option, we recommend that people who wish to do so make arrangements to return to Ireland as soon as possible.

“We are working with Aer Lingus and British Airways to try repatriate citizens in Peru. We are working 24 hours to get the necessary transport and permissions in place to move them.”

She said the Government was aware of two cases of Covid-19 confirmed in a hostel in Cusco in Peru but neither person was an Irish citizen. She urged any Irish citizen in Peru who had not already done so to contact the Embassy of Ireland in Santiago, Chile (which is the nearest embassy).

Turning to the closure of marts, she said the decision taken was unfortunate but necessary.

“Efforts were made to introduce social distancing measures at marts in recent weeks. However, The practice of public auction of livestock , has the potential to attract a gathering of people which the National Public Health Emergency Team considered to be a risk that needed to be addressed.

“The challenge now is to find other innovative methods that can manage the trade and movement of animals in a transparent and secure way.”

The construction sector, she said, had been directed to ensure all workers complied with the distancing and hygiene guidance.

A Construction Industry Federation confirmed to The Irish Times that it directed all sites to comply with guidelines, and told its members it would have 48 hours to comply, otherwise tougher measures would be imposed.

Every site in the State will now have a designated person responsible for overseeing social distancing. In most instances, the role will be taken over by the person overseeing health and safety on the site.

Ms Canavan also said the Dublin Region Homeless Executive had secured 300 additional self-contained units to support the isolation of homeless people who have tested positive for Covid-19, or who need to isolate.

All caravan parks and camping parks have been closed as part of the new tougher measures. For those who live long-term in such parks, Minister for Housing Eoghan Murphy has clarified the closure orders do not affect people living permanently on the sites.

New restrictions have also been introduced in prisons. Each prisoner is allowed one adult visitor only and the visit time will be limited to 15 minutes per visit.

A spokesman for the Irish Prison Service said on Thursday is also looking at options in relation to staggering meal times and recreation time. The IPS has already said it is working to reduce the number of prisoners in the system to reduce risk of transmission.