Dutch far-right parties to get own television channel 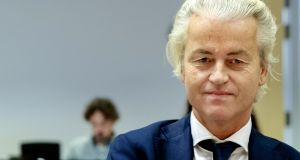 The Netherlands is to get a new television channel and radio airtime dedicated to the politics of the far right and supported by the country’s two high-profile right-wing leaders, Geert Wilders and his 36-year-old challenger, Thierry Baudet.

The channel, which will be called The Unheard Netherlands, is expected to go on air at the end of this year after its promoters clocked up the minimum of 50,000 paid subscribers needed for inclusion in the mix of channels that broadcast under the NPO public broadcasting umbrella.

The consortium – including high-profile former war reporter Arnold Karskens, who styles himself “the people’s journalist” – says it will focus on giving “due respect and attention to Dutch culture, its history, norms and values, and, in particular, its freedom, often taken for granted until recently”.

Karskens says it expects the number of subscribers to have trebled to about 150,000 by the time the stations are ready to broadcast and “give a voice to those who are not currently being heard”.

It’s not clear how the new stations will accommodate both Mr Wilders and his Freedom Party, the dominant force in the Dutch far-right landscape, and Mr Baudet, leader of the nationalist Forum for Democracy, who has described himself as “the most important intellectual in the Netherlands”.

Although it ended up a substantial 13 seats behind prime minister Mark Rutte’s Liberals in the 2017 general election, the Freedom Party took second place nationally with 13.1 per cent of the vote, while the Forum for Democracy fared worse than widely anticipated, taking just 1.8 per cent – a significant difference in popular support.

Mr Wilders has already made a promotional video supporting the channels. He says they’ll provide an important antidote to the current public broadcasting system – which he described as “one big fake news factory”.

Mr Baudet – who holds a PhD in history from the prestigious Leiden University – said the channels would be “fantastic” and would draw a substantial following from consumers who were looking for alternatives to the current diet of “climate hysteria and EU propaganda”.

NPO broadcasters are funded partly from advertising and partly from the public purse. Interestingly, however, commercial broadcaster RTL abandoned a right-wing chat show in 2019 when it failed to build on poor viewership figures.

The station has already had its first bust-up. Comedian Haye van der Hayden left after Karskens said his view that Holocaust deniers should not be excluded was unacceptable.