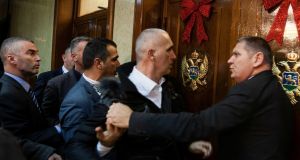 A scuffle in Montenegro’s parliament in Podgorica on December 27th after opposition tried to prevent the vote on a Bill on religious freedoms and legal rights of religious organisations. Photograph: Stevo Vasiljevic/Reuters

Opponents of Montenegro’s new law on religion plan more rallies against what they call an attack on the Serbian Orthodox Church, after thousands of protesters took to the streets and Moscow and Belgrade voiced concerns.

The new law obliges Montenegro’s religious communities to prove that property they hold now was in their possession before the country lost its independence in 1918 and was absorbed into a kingdom run from Belgrade. Critics warn that those that cannot do so may have churches and monasteries confiscated.

Montenegrin president Milo Djukanovic and his government say the law will help right historic wrongs and bolster the country’s statehood and the Montenegrin Orthodox Church, but opponents see it as an assault on the much larger Serbian Orthodox Church, which controls hundreds of properties around the Adriatic state.

Mr Djukanovic signed the law last Saturday, a day after Montenegro’s parliament passed it despite brawls between deputies and street protests led by pro-Belgrade figures and Serbian Orthodox clerics; 17 deputies were among 22 people detained during scuffles.

“I express my concern and hope that Serbian holy sites will be preserved and we will . . . try to help our people and the church,” Mr Vucic said.

“We will help our people [in Montenegro] but we will not destroy bridges with our neighbours.”

Mr Vucic and his government tend to use much more fiery rhetoric over Serb issues in Kosovo, and his mild tone prompted opponents to stage a protest in Belgrade’s parliament last Friday, triggering brief scuffles there between deputies.

Andrija Mandic, a leader of Montenegro’s opposition Democratic Front (DF), told Serbian media that a visit by Mr Vucic next week “would be a great day for Serbs in Montenegro and definitely for Serb unity in general”.

After being detained during the punch-up in the Podgorica parliament, the pro-Serb Mr Mandic declared: “We have said we are ready to die for our church and we are demonstrating that.”

Mr Mandic and DF colleague Milan Knezevic, who was also held by police last week, are in the process of appealing against a five-year jail term for taking part in an alleged Russian-backed coup attempt in Montenegro in 2016.

Moscow denies involvement but it strongly opposed Montenegro’s accession to Nato in 2017 and the Kremlin maintains close ties with Belgrade.

Russia’s foreign ministry expressed “serious concern” over the law on religion this week, and claimed it was a sign of “growing administrative pressure on the Serbian Orthodox Church aimed at squeezing it out of Montenegro completely”.