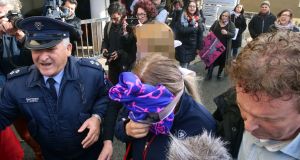 IA British woman has been found guilty of falsely accusing 12 Israeli men of gang-raping her while she was on holiday in Cyprus. Photograph: Philippos Christou/AP Photo

A British woman has been found guilty of falsely accusing 12 Israeli men of gang-raping her while she was on holiday in Cyprus.

The 19-year-old has been held on the island since July, first in a prison in Nicosia then in safe houses. She was forced to surrender her passport after she withdrew an accusation that the Israeli tourists raped her in her hotel room in the resort of Ayia Napa in July.

The Briton, who could be named now she has been found guilty, told police she was gang-raped in Ayia Napa by 12 Israelis aged between 15 and 22.

The accused were immediately rounded up and remanded in custody.

The woman retracted the assertion less than a month after making the claim, in a poorly written confession that her lawyers have since argued she was coerced into signing by Cypriot police. The men were released and have since returned to Israel.

Turning from victim to suspect overnight, the woman was arrested on charges of giving a false statement “over an imaginary offence”.

Lawyers for the woman told the court she had only withdrawn her accusations against the men under duress from police. Rights groups have argued she has not had proper legal representation.

The court, in the town of Paralimni, ruled on Monday that she was guilty of a charge of causing public mischief.

In graphic testimony during the court case, the woman told the court the alleged incident took place while she was having consensual sex with one of the group.

The family said they would appeal against the decision.

As she left the court with her mother after the guilty verdict, the woman was mobbed by photographers and TV crews. Both wore white scarves around their faces depicting lips sewn together - brought by protesters from the Network Against Violence Against Women, who filled the court and demonstrated outside.

The defence lawyer Nicoletta Charalambidou told reporters they planned to appeal against the verdict. “The decision of the court is respected,” she said. “However, we respectfully disagree with it.

“We believe there have been many violations of the procedure and the rights of a fair trial of our client have been violated. We are planning to appeal the decision to the supreme court, and if justice fails ? we are planning to take our case to the European court of human rights.”

The woman’s family set up a crowdfunding page asking for money for legal costs, which has raised more than €60,929 (£52,000). In an online post last week, they wrote: “We remain hopeful that she will be allowed to go home on 30th and that justice will be served.”

Sentencing is scheduled for January7th.

Judge Michael Papathanasiou said the defendant admitted to investigators she had lied and apologised, saying she made up the claims because she was “ashamed” after finding out that some of the Israelis had videoed her having sex on their mobile phones.

The defence lawyer, Ritsa Pekri, asked the court to mitigate her sentence, saying she regretted her actions and did what she did only because she was under strong psychological pressure.

Michael Polak, a lawyer from the Justice Abroad group, which is assisting the woman, said: “We are not surprised by the result given the frequent refusal during the trial of the judge to consider evidence which supported the fact that the teenager had been raped.

“Shutting down questioning from our Cypriot advocates and the production of evidence into the trial on a handful of occasions the judge stridently stated ‘this is not a rape case, I will not consider whether she was raped or not’.

“We have found it incredibly difficult to follow this logic given that an essential element of the offence is for there to be a ‘false statement concerning an imaginary offence’ and therefore, clearly if the teenager was raped, she cannot be guilty.

“This will form a ground of appeal before the supreme court of Cyprus along with a number of other failings in the trial process which resulted in the teenager not receiving a fair trial before the district court as guaranteed by Cypriot law as well as both European community law and European human rights law.” Guardian