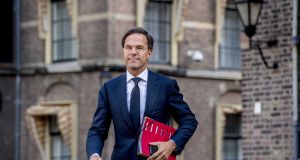 Dutch prime minister Mark Rutte: managed to convince the other three parties the Liberals are in coalition with to commit to a theoretical, unspecified, pay deal for primary school teachers. Photograph: Robin Utrecht/EPA

The caretaker Liberal-Labour government in the Netherlands – now running the country in the absence of an alternative for more than 180 days – has narrowly avoided collapse with a last-minute sticking-plaster deal to increase pay for primary school teachers in the budget next Tuesday.

Labour, which has excluded itself from talks on a new cabinet because of its poor showing in the March election, had threatened to abandon prime minister Mark Rutte’s Liberals, forcing them to table a budget alone, unless the teachers received a “substantial” increase.

Labour is hoping that exerting leverage on behalf of the primary teachers, part of the party’s “natural constituency”, will set it on the path to electoral recovery after plunging from 38 seats to a record low of nine and resigning itself to a period in the backbench wilderness.

Ironically, however, the teachers themselves are not as impressed with the deal – which says only that they will receive “a substantial amount” but gives no indication of the overall value or composition of the pay package – as the Labour politicians who brokered it.

The two main teachers’ unions, the ABO and the CNV, have announced a one-day strike for October 5th which they say will go ahead unless the budget allocation includes at least €900 million for salary increases and another €500 million to increase teacher numbers.

“The whole country realises that primary school teachers are not the sort of people who want golden toilets or expensive cars,” said union spokesman Jan van de Ven. “We are asking for what is reasonable for our members and necessary for our schools.”

In fairness to Labour, the agreement to earmark “a substantial amount” for the teachers came as a significant climbdown for the Liberals, who had consistently dismissed a pay deal as impossible, not least, they claimed, because of a €500 million “black hole” in the education budget.

And in fairness to Rutte, it was example of his political acuity that – having pledged that next week’s would be a “holding” budget, with any new spending reserved to the next government – he could convince the other three parties to the talks to commit to a theoretical, unspecified, pay deal.

For those looking on from outside, the fact that the four parties still involved in the talks – the Liberals, the Christian Democrats, centre-left D66, and orthodox Protestant party Christian Union – were able to reach “agreement” seems an indication that a new coalition can be expected soon.

That is being lent credence by reports that the four parties have already divvied up the ministerial posts, with the Liberals getting six, the Christian Democrats and D66 four each, and Christian Union two – in total 16, three more than in the outgoing government.

Asked if this meant a coalition deal was finally done, Rutte replied only, “No, not yet.”

However, he was goaded by Labour’s caretaker finance minister Jeroen Dijsselbloem, still chairman of the Eurogroup of euro zone finance ministers, who said the negotiations had gone on far too long, adding: “This uncertainty is getting to the point where it is becoming problematical.”

The Netherlands’ longest period of coalition negotiations since the second World War was 208 days in 1977, and the current talks are now the second-longest.

One reason, it seems, is disagreement over the funding of healthcare.

There’s growing public anger over plans to raise the annual health insurance deductible from about €385 this year to more than €400 in 2018 – after promises on the campaign trail that a way would be sought to cap, or even reduce, the cost.

“Unfortunately, the politicians had bigger mouths than wallets,” observed one commentator.