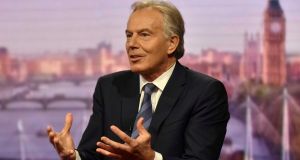 Britain could bring in tough new controls on immigration from the European Union without actually having to leave the bloc, former prime minister Tony Blair said on Sunday.

Concerns over the impact of high levels of immigration on public services and housing were cited as a factor by many who voted to leave the EU in last year’s referendum.

Many Brexit supporters blame Mr Blair’s government, which allowed citizens of former communist states to settle immediately in Britain despite a long transition period implemented by other EU countries, for a big influx of EU migrants from 2004.

“There is no diversion possible from Brexit without addressing the grievances that gave rise to it. Paradoxically, we have to respect the referendum vote to change it,” Mr Blair, who has said Brexit can and should be stopped, wrote in the Sunday Times newspaper.

“We can curtail the things that people feel are damaging about European immigration, both by domestic policy change and by agreeing change within Europe to the freedom of movement principle,” added Mr Blair, who led a Labour government for a decade from 1997.

Asked about Mr Blair’s proposals, defence minister Michael Fallon said the government had to get on with delivering Brexit.

“The country has taken its decision, we are leaving the European Union now and that means freedom of movement has to end ... there have got to be restrictions on those coming here,” he told the BBC.

A leaked government document last week said Britain was considering measures to restrict immigration for all but the highest-skilled EU workers, plans some companies called alarming.

A paper published on Sunday by Mr Blair’s Institute for Global Change said the government could take steps including registering EU migrants when they arrive to keep track of whether they meet EU rules about finding work.

EU migrants could also be forced to show evidence of a job offer before being allowed to enter Britain, and those without permission to reside could be banned from renting, opening a bank account or accessing welfare benefits, it said.

The paper also proposes seeking an ‘emergency brake’ to implement temporary controls on migration when services are stretched – a strengthened version of a deal offered to former prime minister David Cameron ahead of the referendum.