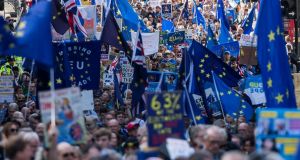 Pro-EU demonstrators march towards Parliament Square in London, on Saturday. Thousands of campaigners and protesters gathered for a march and rally during the ‘People’s March for Europe against Brexit’, to call on politicians to ‘unite, rethink and reject Brexit’. Photograph: Will Oliver/EPA 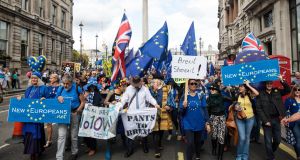 Thousands of anti-Brexit marchers descended on Westminster to demand that Britain stays in the European Union on Saturday.

Organisers estimated at least 50,000 protesters marched through central London before converging on Parliament Square on Saturday for a rally.

The People’s March For Europe carried the message “unite, rethink and reject Brexit” and organisers said leaving the EU “no longer holds credibility inside Westminster, let alone on the streets of Britain”.

It comes days after politicians returned to parliament following the summer recess and ahead of a critical Brexit vote.

MPs are set to vote on the repeal bill, formally known as the EU (Withdrawal) Bill, on Monday for the first time, amid concerns over the progress of Brexit negotiations.

A sea of blue and yellow Remainers amassed outside the Houses of Parliament, some draped in EU flags, while others held them aloft.

Blue wigs, berets and other headgear were in abundance, as were “Exit From Brexit” placards.

A few could be seen wearing blue T-shirts with the words “Remoaner Till I Die”.

Crowds cheered as organiser Graham Hughes opened the event, advocating for a further referendum on Britain’s membership of the EU.

He was joined on stage by a man purporting to be foreign secretary Boris Johnson’s conscience and a Theresa May puppet.

Sir Ed Davey, Liberal Democrat MP for Kingston and Surbiton, told the crowd he was “embarrassed” for Great Britain.

He said: “I’ve gone from anger to distress, from fury to despair. But since the Brexit negotiations begun there’s a third emotion I’ve been feeling.

After being interrupted by boos, he said he felt embarrassed “that these shambolic people are supposed to be representing us. They can’t even negotiate”.

He said he wanted to personally thank Conservative and Labour Remainers who voted for him to be their MP, so he could continue to oppose Brexit.

Jean Lambert, member of the European Parliament (MEP) for London, said she wanted the British people to have a say at the end of the negotiating process, like her.

The Green Party member said, to applause: “I want a similar meaningful vote for people in Westminster. Not a gift from the Government but a right. And I also want a vote for the people of this country.

“Even basic consumer protection says you have a cooling-off period, a time to consider whether or not you are being offered what fits your needs and your ambition. So a vote for the people, not just the politicians.”

The blue and yellow demonstrators fell silent for one minute in respect for the victims of the Grenfell Tower fire, breaking into applause as the 60 seconds ended.

Tory peer Baroness Patience Wheatcroft appealed to demonstrators to keep fighting to stay in the EU, telling them: “You have history on your side.”

She said that whatever is negotiated “will be worse for Britain” and that Brexit will mean “fewer jobs and a less prosperous Britain”.

Appealing to her parliamentary colleagues she said: “We have to stop Brexit. Since we joined the EU we’ve had an unprecedented period of peace and prosperity. It must be right to try and maintain that.

“It’s not undemocratic to try to persuade the electorate to think again about Brexit. That’s democracy at work.

“So I say to my colleagues over the road: ‘You know in your hearts what’s right. Many of you campaigned for Remain, now have the strength of your convictions. Do not be bowed down by the whips. Follow your consciences.”’

The event ended after running over time, with Bob Geldof, who had been expected to address the crowds, not making a speech.