Hundreds of Rohingya Muslims from Myanmar arrive on Shah Porir Dwip island in south Bangladesh, more than 300,000 Rohingya have fled to Bangladesh from Buddhist-majority Myanmar since the latest violence began on August 25. Video: Reuters 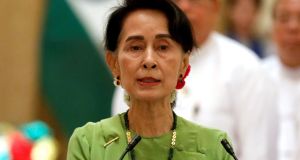 The violence has killed hundreds and driven at least 370,000 Rohingya over the border into Bangladesh in less than three weeks.

She is not Myanmar’s president – her official titles are state counsellor and foreign minister – but she effectively serves as leader of the south-east Asian nation.

The spokesman said President Htin Kyaw was in hospital so the second vice president would attend. “The first reason [Ms Suu Kyi cannot attend] is because of the Rakhine terrorist attacks,” Zaw Htay said.

“The state counsellor is focusing to calm the situation in Rakhine state. There are circumstances. The second reason is, there are people inciting riots in some areas. We are trying to take care of the security issue in many other places.

“The third is that we are hearing that there will be terrorist attacks and we are trying to address this issue.”

Attacks by an insurgent Rohingya group on police outposts on August 25th have set off a wave of violence in Myanmar’s Rakhine state, with hundreds dead and thousands of homes burned — mostly Rohingya in both cases.

The government blames Rohingya for the attacks, but journalists who visited the region have seen evidence that raises doubts about its claims that they had set fire to their own homes.

UN secretary general Antonio Guterres on Wednesday called on authorities in Myanmar to end violence against the majority-Buddhist country’s Rohingya Muslims and acknowledged the situation there was best described as ethnic cleansing.

The humanitarian situation in Myanmar was “catastrophic”, Mr Guterres said, and called on all countries to do what they could to supply aid. “I call on the Myanmar authorities to suspend military action, end the violence, uphold the rule of law and recognise the right of return of all those who had to leave the country,” he said at a news conference.

Many of the fleeing Rohingya have said soldiers shot indiscriminately, burned their homes and warned them to leave or die in what the government has called “clearance operations”. Others said they were attacked by Buddhist mobs.

Asked if the situation could be described as ethnic cleansing, Mr Guterres replied: “Well I would answer your question with another question: When one-third of the Rohingya population had to flee the country, could you find a better word to describe it?”

Ms Suu Kyi, a Nobel Peace Prize laureate who lived under house arrest for many years under a junta that ultimately gave way to an elected government, faces international criticism and pressure.