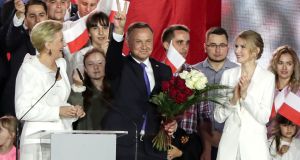 Andrzej Duda has won Poland’s presidential election, after a bitter campaign that laid bare the deep social, cultural and geographical faultlines in the central European nation.

The final result, expected by Tuesday at the latest, is likely to be the closest since the collapse of communism in 1989. Turnout, at 68.1 per cent, is on course to be Poland’s second-highest on record.

“Winning a presidential election with 70 per cent turnout is unprecedented news,” Mr Duda told jubilant supporters after polls closed on Sunday night. “I am hugely moved, thank you from all my heart to all my compatriots.”

Both sides of Poland’s partisan divide cast Sunday’s election as a fork in the road for the EU’s fifth-biggest state, which is deeply divided between its conservative small towns and rural areas and its more liberal big cities.

Mr Duda, a 48-year-old devout Catholic, is only the second president in modern Poland to win re-election. His victory means that Law and Justice will maintain its grip on power until at least the 2023 parliamentary election, and is likely to herald a further period of frayed relations with Brussels.

Since Law and Justice swept to power five years ago, it has repeatedly clashed with the European Commission over a controversial judicial overhaul that has subjugated judges to politicians.

The country’s hardline justice minister, Zbigniew Ziobro, said on Monday that continuing the changes would be one of Law and Justice’s priorities. In recent days, politicians from the ruling camp have also raised the prospect of other contentious reforms, such as “repolonising” Poland’s independent media, much of which is foreign-owned.

Originally due to be held in May 10th, the election was postponed for two months by the advent of the coronavirus pandemic, and became a bitter battle between two clashing visions of Polish identity.

Mr Duda began the campaign by touting big infrastructure projects planned by Law and Justice and positioning himself as a guarantor of the party’s generous welfare programmes, which have significantly improved the lives of many poorer families.

But as the race narrowed, he increasingly sought to mobilise support by portraying himself as a bulwark against foreign threats to Poland’s traditional Catholic values.

At a rally last month, he branded the LGBT rights movement an ideology “more destructive” than communism. Last week, he accused German-owned media of trying to interfere in the election. State media, which has relentlessly backed Mr Duda, also used the highly charged question of Jewish property restitution to mobilise against Mr Trzaskowski.

Mr Duda’s rhetoric resonated with many conservative Poles. “This is a civilisational election, between our Catholic Christian civilisation and neo-paganism,” said Ewa, a mathematician from Targowek, a district in north-east Warsaw, who voted for Mr Duda. “Trzaskowski represents the latter. As [mayor of Warsaw], he officially supported ... the Pride Parade. It’s clear what kind of man he is.”

Mr Trzaskowski sought to parry Mr Duda’s attacks by largely avoiding the topic of LGBT rights, and promising not to abandon Law and Justice’s welfare programmes.

Instead, he promised small investments “around the corner” from ordinary Poles. He also pledged to repair Poland’s frayed relations with the EU, and attacked Mr Duda for failing to stand up to Law and Justice.

In the end, however, Mr Duda emerged victorious, due to a large extent to his bedrock of support in Poland’s deeply conservative rural areas, where Catholic-infused traditional values hold considerable sway.

Mr Duda has assiduously courted provincial voters over the past five years, visiting every municipality in Poland. According to the electoral commission, he won 63.9 per cent of the vote in the countryside, and 64.1 per cent in towns of up to 10,000 inhabitants. Exit poll data suggest that he also won handily among voters aged over 50, farmers, and blue-collar workers. – Copyright The Financial Times Limited 2020

© 2020 The Financial Times Ltd. All rights reserved. Please do not copy and paste FT articles and redistribute by email or post to the web.