Coronavirus: Tokyo’s nightclubs and hostess bars to be paid to close 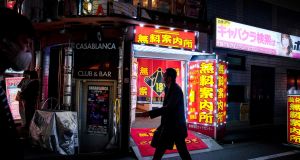 Nightclubs and hostess bars in Tokyo are to be paid to close after the Japanese capital recorded 224 coronavirus cases on Thursday, the highest daily tally since the pandemic began.

Authorities had previously refused to give nightlife businesses economic support during the pandemic, but have changed tack after 80 per cent of Thursday’s infections were among people in their 20s and 30s. Many of them were identified after more than 3,000 tests were carried out in Tokyo entertainment districts, including Shinjuku and Ikebukuro.

The Tokyo metropolitan government will pay 500,000 yen (€4,150) to nightclubs and similar establishments that close for 10 days or more.

Hosts and hostesses, who engage customers in conversation over drinks, who are found to have coronavirus are to be paid 100,000 yen to stay off work.

Kaori Koga, a representative of the Japan Night Entertainment Business Association, told public broadcaster NHK: “The many cases of infection that have been confirmed may cause trouble for other areas of business, for which we are truly sorry, but we are trying to take precautions to prevent infections at many of our establishments.

“Many people in our industry need to work to survive, so we are asking the authorities to support us,” she added.

Thursday’s cases brought the total number of infections in Tokyo to 7,272, accounting for more than a third of all cases nationwide.

The previous highest single-day total was 204, recorded a week into the state of emergency in Tokyo, which ran from April 7th to May 25th.

Tokyo governor Yuriko Koike, who was re-elected for a second term with a landslide victory on Sunday, said she was not considering asking other businesses to shut down again despite the spike in cases this week. The Tokyo government doesn’t have the legal authority to force closures.

Japan’s professional football and baseball leagues will start letting fans into stadiums again from this weekend. A maximum of 5,000 people will be allowed into each game, with no away fans permitted and bans on cheering, singing and flag-waving imposed nationwide. – Guardian