Trump says Covid-19 will disappear after US reports record increase

US president Donald Trump tells Fox Business that he likes the way he looks when wearing a face mask before going on to say that he thinks Covid-19 is "going to sort of just disappear. I hope." Video: Reuters 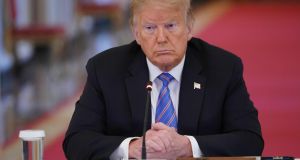 US president Donald Trump has been accused of being in denial about coronavirus. Photograph: Getty Images

Donald Trump has said he believes the coronavirus will “just disappear”, one day after the US recorded more than 44,000 new cases, a new all-time daily high.

Eight states reported new single-day highs of freshly diagnosed cases on Tuesday, and the dire numbers follow a warning by the public health expert Anthony Fauci that the US is “going in the wrong direction” and infections could more than double, to reach 100,000 cases a day.

In an interview with Fox Business on Wednesday, Mr Trump was asked whether he really believes, as he has stated previously, that the virus will simply disappear.

“I do. I do,” the president said. “Yeah sure. At some point. And I think we’re going to have a vaccine very soon too.”

“We’re headed back in a very strong fashion... And I think we’re going to be very good with the coronavirus,” he added. “I think that at some point that’s going to sort of just disappear. I hope.”

Mr Trump has faced fierce criticism for downplaying the risks of the virus, and for his refusal to promote simple safety measures such as wearing a mask. Asked about this on Wednesday, he said he “thinks masks are good” but said he does not believe making masks mandatory across the country was necessary.

The European Union confirmed on Tuesday it would bar Americans from non-essential travel to the bloc while the US struggles to bring the virus under control.

New York governor Andrew Cuomo, a Democrat, excoriated Trump for his continued defence of the administration’s slow and chaotic response to the outbreak, saying at a press briefing: “The buck stops on the president’s desk”.

“He was in denial. He has been denying what every health expert in America has been saying. Come clean with the American people. At least have the courage to admit what everybody else already knows: you were wrong,” Mr Cuomo said.

The governor went on to implore states to reject the president’s rhetoric and listen to the science, making a play on Mr Trump’s former time as a reality TV host.

“Denying reality does not defeat reality. He has lived in denial, and he has been denying the scientific facts since day one,” he said. “Reality wins and reality won, and now the country is suffering because of the president.”

A number of states have been forced to roll back reopening efforts. In California, the governor ordered the closure of all recently reopened bars on Wednesday, and halted indoor operations of restaurants, movie theatres, museums and zoos across the majority of the state following a surge in coronavirus cases.

Arizona’s governor, Doug Ducey, abruptly ordered bars, gyms, movie theatres and water parks to shut down this week, as the state became one of the worst hit in the US.

In Texas, elective surgeries in some counties were abandoned, as the state grapples with more than 6,500 people hospitalised from Covid-19.

Meanwhile, several Texas bar owners filed a $10 million federal lawsuit against state governor Greg Abbott, in an attempt to void his executive order shutting down bars for a second time since the beginning of the coronavirus pandemic.

As the new details on the extent of the crisis emerged, Mr Trump launched a series of attacks on Joe Biden, CNN, the New York Times, US senator Elizabeth Warren and MSNBC.

In tweets, Mr Trump said that Biden was “corrupt”, suggested again that people damaging federal statues and monuments could spend more than 10 years in prison, and again used the racist term “Pocahontas” as he criticized a plan by Warren to rename US military bases named after Confederate figures. Warren has claimed to have Native American ancestry.

Amid his frenzy of internet use, Mr Trump also retweeted a post from himself, made a day earlier, which read: “THE LONE WARRIOR!” and lauded the conservative channel Fox News for having bested its rivals in TV ratings, adding “Thank you President Trump”. – Guardian