Many face reprisals when outspoken about how the virus is being combatted, says Amnesty report

As fears increase of a second wave of Covid-19, Australian state New South Wales has found 14 new cases over the weekend. 13 of the these centre around a pub frequented by long distance freight truck drivers. Video: Reuters 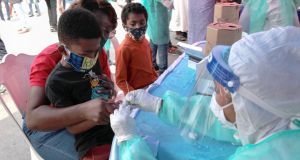 More than 3,000 healthcare workers are known to have died from Covid-19 around the world but in many cases they face reprisals if they speak out against how the disease is being combatted, Amnesty International has said in a new report.

With 545 fatalities, Russia has the highest known death toll of healthcare workers of 79 countries included in the study, although Amnesty has said the global total is likely to be a “significant underestimate” due to under-reporting.

It has asked that states put in place a system of compensation for frontline medical staff and said governments must be held accountable for deaths.

There is currently no systematic global tracking of health and essential workers mortality rates, according to Amnesty which has estimated the numbers in its report, Exposed Silenced Attacked, by compiling what data it could find up until July 6th.

In one instance it cites the International Council of Nurses which has said more than 230,000 health care workers have contracted the disease, and more than 600 nurses have died.

“Health workers and many other essential workers often face greater exposure to Covid-19 as a result of their occupations, and may therefore be at greater risk of infection, serious illness, and even death if not adequately protected,” the report said.

In almost all of 63 surveyed countries and territories, it found “serious shortages” of personal protective equipment (PPE) reported by workers. Trade restrictions may have aggravated this problem, it said.

As well as the numbers of deaths, the report examines the treatment of workers and the consequences they often face if they speak out about the conditions or approach to fighting the outbreak. These responses, it said, have included arrest and detention, threats and dismissal.

“It is especially disturbing to see that some governments are punishing workers who voice their concerns about working conditions that may threaten their lives,” said Colm O’Gorman, executive director of Amnesty International Ireland.

“Health workers on the front line are the first to know if government policy is not working, and authorities who silence them cannot seriously claim to be prioritising public health.”

In at least 31 of the countries surveyed, researchers recorded reports of strikes or threatened strikes and protests by health and essential workers as a result of unsafe working conditions.

In many countries, such actions were met with reprisals from authorities. In Egypt, nine health care workers were “arbitrarily detained” between March and June on “vague and overly broad charges of ‘spreading false news’ and ‘terrorism’” it said. “All those detained had expressed safety concerns or criticized the government’s handling of the pandemic.”

It reports that in Malaysia police dispersed a peaceful picket against a hospital cleaning-services company. It also cites the example of the American nursing assistant Tainika Somerville who it said was fired after posting a video on Facebook that addressed a shortage in PPE.

Workers have also been subjected to stigma and violence because of their jobs. The report documents the case of a Mexican nurse reportedly drenched with chlorine on the street.

“These incidents point to a climate of misinformation and stigma and underscore the importance of governments providing accurate and accessible information on the spread of Covid-19.”