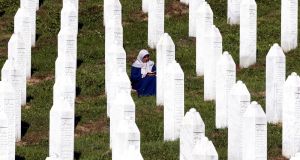 Bosnia is marking the 25th anniversary of the Srebrenica massacre, the only crime in Europe since the Second World War that has been declared a genocide.

Only a small number of survivors were allowed to take part in commemoration events due to the coronavirus pandemic.

The brutal execution in July 1995 of more than 8,000 Bosniak Muslim men and boys is being commemorated in a series of events including the reburial of recently identified remains of nine victims in a memorial cemetery just outside the town in eastern Bosnia.

The Srebrenica massacre is the only episode of Bosnia’s 1992-95 war to be defined as genocide, including by two UN courts.

After murdering thousands of Srebrenica’s Muslims, in an attempt to hide the crime, Serbs dumped their bodies in numerous mass graves scattered throughout eastern Bosnia.

Body parts are still being found in mass graves and are being identified through DNA analysis. Close to 7,000 of those killed have already been found and identified.

Newly identified victims are buried each year on July 11th — the anniversary of the day the killing began in 1995 — in the memorial cemetery outside of Srebrenica.

Typically, thousands of visitors from various countries attend the commemoration service and funeral, but this year only a relatively small number of survivors were allowed at the cemetery due to the coronavirus pandemic.

Dozens of world leaders, including Canadian prime minister Justin Trudeau and Spain’s Pedro Sanchez, US secretary of state Mike Pompeo and the Prince of Wales, have sent video messages to be played at the ceremony.

Minister for Foreign Affairs Simon Coveney said the genocide was “one of the worst atrocities to take place on European soil” and the “psychological wounds remain, particularly for the families and communities directly affected”.

He said that although Covid-19 prevented a physical commemoration in Ireland, “it is important that we remember this event for what it was: an appalling act of genocide”.

“I want to commend the work of the Bosnia-Herzegovina Association of Ireland who have worked tirelessly, along with other members of the Bosnian community in Ireland, to ensure that the events in Srebrenica have been remembered and marked in Ireland over the years.

“Ireland has respect for human rights at the heart of our foreign policy, and we know from our own history the importance of reconciliation and lasting peace. We will therefore continue to support the people of Bosnia and Herzegovina on their own journey towards reconciliation.

“We will also continue to support their path towards the European Union, a community which is founded on the values of equality and respect for human rights,” Mr Coveney said.

1 Aaron Brady, the man who said with pride he was a cop killer
2 'Hot-bedding' and bogus work practices taking place in meat plants, union claims
3 Case of Covid-19 confirmed at community creche in south Dublin
4 A year after Nóra Quoirin’s body was found, her parents still believe she was abducted
5 Gardaí say they have evidence linking other south Armagh men to Adrian Donohoe murder
Real news has value SUBSCRIBE