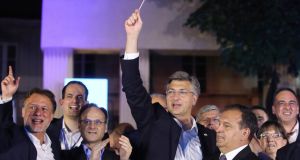 With nearly all votes counted from Sunday’s ballot, the ruling HDZ had secured 66 of the 151 seats in Croatia’s parliament, well clear of the Restart alliance led by the Social Democrats (SDP) with 41 seats, and the nationalist Homeland Movement with 16.

Polls had predicted a much tighter race, and analysts said the result vindicated Mr Plenkovic’s decision to call an election in the wake of Croatia’s successful handling of its initial coronavirus outbreak and its move to reopen to foreign holidaymakers last month to bring in vital revenue.

At the same time, voters did not heed opposition attempts to blame the HDZ for a resurgence in coronavirus cases in the last fortnight, which has deepened fears for the economy of the tourism-reliant Adriatic state.

Mr Plenkovic held talks on Monday with representatives of two small liberal parties that each claimed one seat, and deputies representing the country’s national minorities, which have an allocation of eight seats.

“They give clear support to the new parliamentary majority and the HDZ government that will be led by Andrej Plenkovic,” said government spokesman Marko Milic.

An agreement with those deputies would give Mr Plenkovic a working majority of 76 seats and avoid the need for any deal with folk singer Miroslav Skoro’s populist, nationalist Homeland Movement, which may appeal to far-right leaning elements of the HDZ but would alarm liberals at home and abroad.

“We’ve had a difficult term full of challenges, and the challenges ahead of us are even greater,” Mr Plenkovic (50) said of the HDZ’s victory. “Support like this is a huge obligation and we will be mindful of it. Croatia needs solutions for the economy and the challenges in the public health sector.”

The European Commission has expressed regret at how its president, Ursula von der Leyen, appeared in a campaign video for the HDZ.

The ex-German defence minister is a member of the Christian Democratic Union, which like the HDZ belongs to the European People’s Party. Fine Gael is also a member of the EPP and its leader, Tánaiste Leo Varadkar, also appeared in the promotional clip.

Commission spokesman Eric Mamer said Ms von der Leyen took part “in her personal capacity” but “regrettably, this was not made clear in the final version of the video”.