Defender Marc Bartra is injured as a blast follows three explosions near the Borussia Dortmund team bus that was on its way to Tuesday's Champions League game against Monaco. Video: Reuters 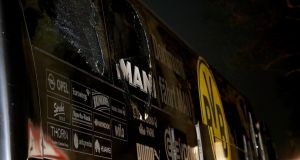 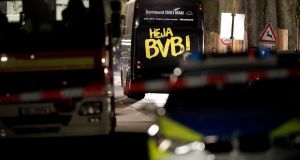 Police have found a letter which claims responsibility for the attack. Photograph: Friedemann Vogel/ EPA

German prosecutors have confirmed a “likely” Islamist terrorist link to the bomb attack on the Borussia Dortmund team bus on Tuesday.

The attack saw the postponement of a Dortmund-Monaco Champions League quarter-final.

After the rescheduled match got under way on Wednesday night, police found two suspicious objects at the stadium’s southeast gate, but reopened the gate after determining they were not dangerous.

Two men with links to Germany’s Islamist scene are at the heart of the investigation, according to reports: a 25-year-old Iraqi man from Wuppertal in western Germany and a 28-year-old German man from a small town near Dortmund. After searches of their homes, one of the men was taken into custody for questioning about the attack on Tuesday evening.

The Champions League quarter-final between Dortmund and the French club AS Monaco was postponed after three explosions went off as the German team’s bus made its way to the match.

Two men were injured in the attack: a police outrider accompanying the bus and 26-year-old Spanish defender Marc Bartra. He was hospitalised with a broken wrist and was operated on to remove glass shards.

The match was rescheduled for Wednesday evening and, ahead of kick-off, German chancellor Angela Merkel wished players and fans a “peaceful and good game.

“We are all agreed that this was a revolting act,” she said, praising the “great solidarity” shown by fans from Germany, Dortmund and Monaco, which she described as “a clear signal against every kind of violence”.

Letters found in triplicate at the scene of the explosions, littered with spelling and syntax mistakes, apparently referenced December’s Christmas market attack in Berlin and German military involvement in Syria.

Prosecutors were still unsure whether the letter was genuine or a false lead. “It makes an Islamist link possible,” said Frauke Köhler, the federal prosecutor’s spokeswoman.

The eight-sentence missive, “in the name of Allah the merciful”, references the killing of “12 non-believers” – an apparent reference to Berlin’s Christmas market attack, carried out by a Tunisian man with Islamic State sympathies. The letter demands the closure of a US military base in Germany’s Ramstein and condemns German military flights “over the territory of the caliphate to kill Muslims”, while accusing Dr Merkel of treating German citizens like “dirty subjects”.

German terrorists experts are viewing the letter with a certain level of suspicion, saying Islamic State – also known as Isis – does not usually leave notes claiming responsibility. Several pointed to the letter’s unusual nature – containing demands but no signature of Islamic State symbols – and the lack of reference to Dortmund in Islamic State communications on Wednesday.

Investigators dismissed as a hoax a second letter, from a left-wing anarchist group, allegedly claiming responsibility.

Germany’s federal prosecutor said in a brief statement at lunchtime on Wednesday that the three explosive devices projected metal shrapnel in a 100m radius, with some metal shards embedding themselves into the headrests of the team bus.

“We can be thankful that nothing worse happened,” said Ms Köhler.

The explosions took place a minute after the BVB team bus left the team hotel, 10km south of the western city of Dortmund, on Tuesday at 7.15pm.

The rescheduled match went ahead at 6.45pm local time on Wednesday, attended by Hannelore Kraft, premier of the western state of North Rhine-Westphalia, and federal interior minister Thomas de Maizière.

To accommodate additional security measures, police urged fans to come early to the match and not to bring rucksacks.

Officials in the western state said that, while there was no terrorist alert for the rescheduled match, a high terror alert would remain in place for the foreseeable future.

“As long as the perpetrators are not caught and danger threatens, every major event in North Rhine-Westphalia has to be be reviewed and extra security measures,” said Ralf Jäger, NRW interior minister.

Bartra, the injured defender, posted a picture of himself with a bandaged arm and a plastered wrist. “As you can see I am doing much better,” he wrote, wishing his team well in the match.

Ahead of the refixture, Borussia Dortmund officials said players were given the option of sitting out the match.

“We want to show that terror and hatred can never dictate our actions,” said Hans-Joachim Watzke, the club’s chief executive.

Team captain Marcel Schmelzer said the players were “all in shock” but were all motivated to play on Wednesday in a show of support for fans.