Leicester prepare for biggest match in their history 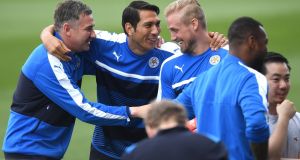 Craig Shakespeare, preparing to take Leicester City into one of the biggest matches in the club’s history, insisted he was “quite comfortable with my own conscience” after claims by Claudio Ranieri that an unnamed member of his backroom staff may have contributed to his sacking in February.

Ranieri’s remarks that “somebody behind me” might have undermined him created an awkward backdrop for Shakespeare, the Italian’s assistant last season, when he arrived in Spain for the first leg of Leicester’s Champions League quarter-final against Atlético Madrid at Estadio Vicente Calderón.

Shakespeare has guided the team away from the Premier League’s relegation zone since taking charge after Ranieri’s dismissal but the former manager’s words led to renewed questions about whether the man who won the most implausible title of the modern era had been stabbed in the back.

“I think Claudio was in good humour, and came across as I know him, but from my first interview [since replacing him] I have said I spoke to him when he left and he thanked me for my time,” Shakespeare said. “I thanked him and there has never been any falling out. This is football and I am glad to see he is enjoying his football again.”

Pressed further, Shakespeare indicated he did not think Ranieri sounded absolutely certain – “I think he said ‘maybe’,” he noted – but could not explain why the Italian would say it if there was no truth to the allegation. “My stance is still the same. We never had a falling out. I haven’t seen the interview live but I think I have answered the question.”

Ranieri had said he was aware of “a lot of stories” and, speaking on Monday, added he could not believe the players he had led to the championship would go against him, as has been reported. His comments have inevitably brought scrutiny on Shakespeare but when Ranieri was asked directly about his former assistant in a separate interview with Gazzetta dello Sport he appeared to exonerate him, describing him as a “loyal assistant”.

Shakespeare was asked whether he would have preferred Ranieri to name who he meant and whether it would have been better if his first post-sacking interview with the English media had not taken place in the week of such an important game. “Free speech is there for anybody,” Shakespeare said. “I don’t have a problem with it. I am quite comfortable with my own conscience, so I can’t do anything about it.”

Leicester go into the game without their captain, Wes Morgan, who is still troubled by a back problem, and with four players – Jamie Vardy, Robert Huth, Islam Slimani and Wilfried Ndidi – facing the possibility of missing the return leg if they receive yellow cards against Diego Simeone’s team.

Shakespeare said he would be reminding the relevant players to take extra care but was satisfied they would handle any provocation from the side who are third in La Liga. “We are generally a well-disciplined team. The players will be reminded about their responsibilities and to make sure we don’t get any stupid cards, and by that I mean for things like encroaching,” he said. “It is something we will talk about with the players. Game-management is important, and never more so than in Europe. You have to be prepared for the what-ifs and we will be ready for that.”

Meanhile, Atlético Madrid boss Diego Simeone has put his players on alert to combat in-form Jamie Vardy. Simeone praised the England striker and believes the hosts must keep it tight to avoid Vardy scoring an important away goal.

“I like him, I really rate him as a striker. He is the kind of powerful striker Atlético have had,” said Simeone. “He also gives the team a lot of depth, and makes life really difficult for defenders to get the ball out.

“He is very dangerous and if we make any mistakes, he will penalise that. Last season he was very consistent, very good.

“This season as we all know he was struggling a little bit at the start but now he seems to be back on form.”

Vardy scored a crucial away goal in Leicester’s 2-1 defeat in Sevilla before Leicester won the second leg 2-0 to progress in their last-16 tie 3-2 on aggregate.

Shakespeare compared the teams’ work ethic and Simeone accepted Atlético’s style could be a role model for clubs.

Simeone said: “Nobody has proof in terms of how to play and win. There are different styles. Our style has been based on humility, hard work and being competitive in every competition.”