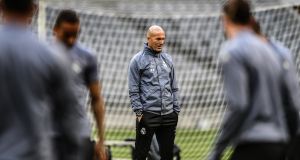 Real Madrid’s head coach Zinedine Zidane Zidane will go into the Champions League tie against Bayern Munich under some pressure with talk that some of his superstars are not happy with his squad rotation policy. Photograph: Filip Singer/EPA 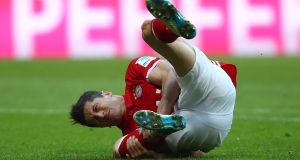 Lewandowski suffered a shoulder injury during last weekend’s Bundesliga win over Borussia Dortmund and lasted only 20 minutes of a training session this week as he fights to be fit.

Ancelotti told a press conference: “He has been training, just 20 minutes because he has problems with his shoulder, but we had a good feeling beforehand.

“We will finally decide whether he can play on Wednesday – if he is in pain, he won’t play.

“I don’t know if he will feel better but that will not change our idea or our strategy, nor our self-confidence. We know how important Lewandowski is, but we can be strong without him.”

Ancelotti expects to be able to welcome back goalkeeper Manuel Neuer after his recent injury but defender Mats Hummels is definitely out after damaging ankle ligaments on Sunday.

The Italian is relishing the chance to face his former club for the first time since he left the Bernabeu in 2015, and linking up once again with his former assistant Zinedine Zidane.

Ancelotti added: “I like him very much and I am very happy with how he is working and of course had a fantastic quality as a player.

“In my time at Real, he was an excellent assistant coach who could help with the charisma and experience, and when I got to know him I changed some of my ideas about football.”

Zidane himself does not believe their familiarity is of much consequence ahead of the tussle.

He told the club’s official website: “We know each other very well, but that doesn’t mean anything: it’s not an advantage or a disadvantage. It’s two good teams coming up against each other and that’s all there is to it.

“We’re not lining up against Carlo. I’ve learned a lot from him.”

Despite his side sitting on top of the LaLiga table Zidane will go into the game under some pressure with talk that some of his superstars are not happy with his squad rotation policy.

Zidane also has a shortage of options in defence with Pepe and Raphael Varane ruled out for both legs, Pepe having suffered a double rib fracture in last Saturday’s 1-1 draw with city rivals Atletico.

Zidane added of Real’s opponents: “I don’t fear Bayern, I’m more bothered about what we do.

“We’ll come up against a Bayern side that’ll start strongly, they always do and all the more so at home. They know how to dominate a game and they always try to play with greater intensity than their opponents.

“We face fine opposition, but ultimately what I’m bothered about is what we do. We’re a strong and well-balanced side.”

Gareth Bale, Karim Benzema and Cristiano Ronaldo will be looking to rekindle some of the magic they once served up under Ancelotti when they face their old coach in the latest edition of Real’s rivalry with Bayern.

Real’s ‘BBC’ trident enjoyed one of their most productive nights under Ancelotti the last time they were in the Allianz Arena, running riot in a 4-0 win to inflict the heaviest ever defeat on a side coached by Pep Guardiola.

The expensively assembled trio have frequently been blamed by the Spanish media for Real’s unconvincing attacking displays this season, however, with the team relying on other parts of the team, not least defender Sergio Ramos, for goals.

The spotlight will be on the out-of-form trio as Real resume their bid to become the first team in the Champions League era to retain the trophy.

Bale, albeit while missed three months of action through injury, has endured his worst season since joining Real with nine goals in all competitions, while Ronaldo, with 19 in the league, is on course for his worst domestic tally since 2010.

Benzema, meanwhile, has also been far less prolific in domestic matches this year but is the team’s top scorer in the Champions League with five goals to only two each from his Portuguese and Welsh team- mates.

Games between the most successful clubs from Germany and Spain have thrown up plenty of violent scenes in the past, from Bayern goalkeeper Sepp Maier breaking Roberto Martinez’s nose in 1976 to Juanito stamping on Lothar Matthaus’s head in 1987.

Bayern’s Arjen Robben, however, thought there would be no residual hard feelings left over from the thumping his side suffered in 2014.

“Not at all, it is part of the past and not important anymore, we are only interested in the future,” the former Real Madrid winger told Spanish daily AS.

“We are playing to reach the semi-finals against a team of the size of Real Madrid and our objective is to progress. Nothing else interests us.”