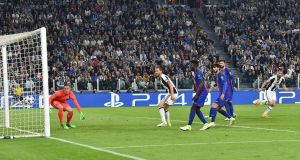 Barcelona need another Nou Camp miracle if they are to reach the Champions League semi-finals after a crushing 3-0 loss to Juventus in Turin.

Paulo Dybala struck twice in a stunning first half and Giorgio Chiellini added a rare third after the break as the hosts claimed a commanding advantage ahead of next week’s second leg.

Dismal Barcelona’s only hope is to repeat their feat of the previous round, when they recovered from a 4-0 first-leg loss to Paris St Germain by beating the French side 6-1 at home.

But on the evidence of Tuesday night a second comeback looks highly unlikely after Juventus dominated proceedings with the help of Dybala’s brilliant first-half brace.

The home side hared out from the first whistle and had their first chance after less than three minutes when Gonzalo Higuain wasted a good chance in front of Barcelona goalkeeper Marc-Andre ter Stegen.

Luis Enrique’s men, smarting from a domestic defeat to Malaga at the weekend, looked clueless over how to deal with their opponents’ attacking threat and they fell behind with just seven minutes on the clock.

The superb Juan Cuadrado found Dybala on the right side of the box and the striker curled an excellent left-foot shot past the helpless keeper.

Barcelona responded well and could have grabbed an equaliser after 20 minutes when Lionel Messi threaded the ball to Andres Iniesta whose low shot was well saved by Gianluigi Buffon.

Moments later, Juventus surged down the left flank and Mario Mandzukic crossed for the unmarked Dybala, who fired his second of the game past ter Stegen to put the Italians 2-0 up.

Messi had an effort ruled out for offside on the half-hour before Juventus came close to increasing their lead when Cuadrado pulled back for Miralem Pjanic who blazed over the bar.

Barcelona started the second half in much better fashion with Messi rolling an effort inches wide of the upright and Buffon just beating Luis Suarez to an Ivan Rakitic through-ball.

Higuain rolled a weak effort at ter Stegen before Chiellini made it 3-0 after 55 minutes, out-jumping Javier Mascherano to head home only the second Champions League goal of his career.

Knowing a precious away goal could still help turn the tie in their favour, Barcelona began to press with Suarez trickling a fine chance wide then Neymar seeing an effort blocked by the busy Chiellini in the box.

Barcelona’s mis-firing mega-stars endured more frustration in the final quarter of an hour, Suarez mis-controlling after a pass across the six-yard box by Neymar, then Messi mis-judging a fine chance from a corner.

Marshalled by a towering performance by Brazilian Alex Santos, the Juventus defence held out and Messi’s last chance to reduce the deficit came to an end when he spun a free-kick into the Italians’ wall.

1 The Offload: Ireland are stuck in no man’s land
2 Nicky English: Galway and Waterford face battles with fatigue in All-Ireland semis
3 Every kind of wind imaginable was against Tipperary football - and they came through
4 Ken Early: Roles have reversed for Guardiola and Mourinho
5 Former Ireland assistant manager Maurice Setters has died aged 83
Real news has value SUBSCRIBE