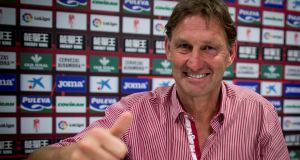 Former Arsenal and England captain Tony Adams gives a thumbs up after being presented as the new head coach of Granada. Photo: Pepe Marin/Reuters

Tony Adams took over as coach at the Spanish club Granada on Tuesday in an attempt to get a reaction that will save the side from relegation, but he does not intend to be there beyond the end of the season.

Adams, the former Arsenal captain, has swapped his office for the pitch at the club’s training ground, where he said that he would give the players “a kick up the arse”. The 50-year-old had not planned to take over first team duties but has stepped in after the decision was made to sack coach Lucas Alcaraz as the team struggles in 19th place in La liga, seven points from safety with seven games to go.

Adams arrived in Granada in November in order to analyse the situation at the club and oversee any necessary restructuring on behalf of the Chinese company DDMC, owned by Jing Lizhang, which took over in the summer. The club had initially been entrusted to the Catalan company Mediabase, which had overseen the sale from the Watford owner Gino Pozzo. DDMC also own the Chinese club Chongquiq Lifan, and intend to add three others to their portfolio.

Adams had coached Gabala FC in Azerbaijan, later becoming sporting director, before joining DDMC. He takes over a 25-man squad that includes players of 17 different nationalities and 13 who are on loan. Only 44 of the 106 players at the club, from first team through to the Under-19s, are owned by Granada.

The first team squad is young and inexperienced. That will change with the restricting that Adams was already preparing before taking over first team coaching duties,

Adams arrived in Spain in his role overseeing DDMC’s clubs and a decision was eventually made to sack the sporting director, Javier Torralbo, following the winter window. They chose to stick with Alcaraz, a club legend, but he was sacked after a defeat against Valencia at the weekend. Jing Lizhang asked Adams to take over.

Adams, who has managed Wycombe Wanderers and Portsmouth before going to Azerbaijan, admitted that he does not have top level coaching experience but he knows the club inside out and there was a belief that he was the best short-term candidate. His contract has not changed and there will be no bonus in the unlikely event that he manages to keep the team up.

Granada want the next coach to be Spanish, preferably from Andalucia. That process is already underway, as is the restructuring for next season – although they do not yet know which division they will be in.

Granada have conceded 65 goals this season and Adams will seek to improve them defensively as a matter of urgency. Organisation and motivation are his priority. During his press conference, he pointed out that Gabala FC kept 12 clean sheets.

“The team needs leadership,” said the former England defender. “And that has to come from the manager.”