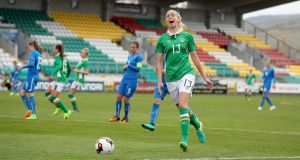 The investment it took was tiny by comparison with the men, of course - and the success less celebrated - but when the Chelsea women’s team won the league and cup double back in 2015 one of the more surprising people acknowledged in their moment of triumph was John Terry.

Six years previously, a similar crack at establishing Chelsea as the England’s top women’s side (how does the “Ladies” thing persist?) had failed and the club seemed, for a while, to be losing interest.

Budget cuts that threatened to undermine whatever progress had been made up until then were announced but the side was saved by an unlikely source: Terry, who stumped up himself and persuaded other members of the richly rewarded men’s squad to do exactly the same. When you’re as well paid as they are, even a little bit of solidarity can go a very long way.

A few years on, the club stepped up its funding again but Terry was still president of the women’s section when they won their double.

The problem at Chelsea, like in Ireland last week, is that the finances of football are, at the top end, dictated by market forces, however ludicrous they might be, and when it comes to the women’s game, they remain, for all the talk, rather less favourable.

When asked a couple of years back about the loss of the players’ rather meagre €30 per diem, former Irish team manager Sue Ronan suggested that in the association’s eyes there was essentially the men’s senior team and then everything else; the logic being that one brings in very substantial amounts of revenue while the others all cost the association.

That line is blurred by the fact that the underage men’s sides feed in to the senior set up and the upshot is that there are undoubtedly people involved in the game who believe that the women’s team actually gets too great a share of the resources.

Clearly, though, there are also issues of simple respect at play as well as another financial reality: that there would be teenage boys making very significantly more out of football than established female senior internationals.

Current boss Colin Bell, in any case, pointed to the fact that he had been hired a few months back to take over the team as evidence of the association’s commitment to the women’s team and there is some merit to this. Few would have complained had Dave Connell been given the job after the work he has done with the under-19s but Bell’s CV is impressive and he clearly wasn’t taken on because he was the cheaper option.

The actual scale of the FAI’s commitment is impossible to gauge, though. The association provides little or no detail of the grant funding it takes in for the women’s game but six years ago, the league here was launched with significant support from Uefa and the organisation’s accounts for 2016 show that €100,000 was given towards the implementation of the Women’s Development Plan here with a further €250,000 towards the combined cost of participating in women’s, youth and futsal competitions. There is other income too.

It has all contributed to some progress being made but Bell’s suggestion (echoed by John Delaney on Saturday) that the players could do with delivering now that they have got what they wanted rather overlooks all of the hurdles still to be overcome; most obviously the relative weakness of the league here.

Some clearly do fairly well out of scholarships abroad but they are a very mixed bag and there is little incentive for anyone to join clubs in England, the traditional destination for our best male prospects.

Clearly, such moves would be likely to improve the squad as the club set up here is amateur and, in some cases, despite the best efforts of volunteers, amateurish, but English clubs do not pay their female players the sort of money that would have people rushing to up sticks and relocate, in part because the best players from a number of other countries, most obviously England, have their incomes supplemented by grant funding.

The association obviously has more to do although their ability (or willingness) to do it is linked, at least some extent, to these external sources of funding.

Perhaps it shouldn’t fall entirely to them. It would have been nice, for instance, if there had been more by way of public support for the women over the past week from members of the men’s team. James McClean offered some and Emma Byrne tweeted about a supportive call from Roy Keane but how much more impressive it would have been had the players, as a group, done something more tangible.

There was a day when the this squad’s predecessors had to fight battles much like the one that the women have just fought but thanks, in part to Keane, they are well looked after these days and get paid a couple of thousand euro per international game into the bargain.

It might not have taken the women six years and the threat of strike action to win to win a fraction of that if the men had managed a show of solidarity somewhere along the line.

It is actually open to question why players in the Premier League, where the average wage at even the lowest paying club - Burnley - is around €22,000 per week, or even the Championship with an average for the entire division of, 12 months ago, around €7,000 (both before bonuses) are still getting paid to play for Ireland at all.

But an offer to pool a portion of their match fees would also have been an impressive gesture. The suggestion is not intended to get the FAI off the hook because the withdrawal of the €30 per day payments and much of what followed was pretty outrageous but hey, if John Terry can put his hand in his pocket...