Spanish defender Marc Bartra (26) injured in incident; game to go ahead on Wednesday 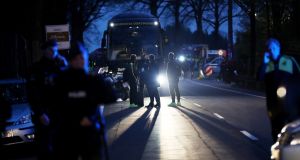 Head coach Thomas Tuchel of Borussia Dortmund stands near the team bus after it was hit by an explosion in Dortmund, Germany. Photograph: Maja Hitij/Getty Images

Borussia Dortmund’s team bus was rocked by three explosions on Tuesday that caused defender Marc Bartra to need hospital treatment and forced the postponement of a Champions League soccer game against Monaco.

The German club announced a bomb exploded on their bus before the first leg of the quarter-final tie, which was put back until Wednesday.

The incident was believed to have happened several kilometres away from Dortmund’s stadium.

A statement on the club’s Twitter account said: “Bomb explosion on the team bus at the team hotel. Players are safe.”

In an initial announcement, Dortmund, also known as BVB, had said: “At the departure of our bus, an incident occurred. One person was injured.”

The injured individual was confirmed to be Dortmund’s Spanish defender Bartra.

His club tweeted: “Dortmund confirmed In the explosion MarcBartra was injured and is currently in the hospital. Good and fast recovery, Marc! #bvbasm”

Dortmund and European governing body Uefa said shortly after 7.30pm Irish time that the match had been called off, and would instead kick off at 5.45pm on Wednesday.

BVB said in a statement: “The first leg of the Uefa Champions League quarter-final between Borussia Dortmund and AS Monaco, which was scheduled to kick off at Signal Iduna Park at 20:45 CET [8.45pm Irish time] tonight, has been cancelled and postponed until tomorrow.

“This was due to an incident involving the BVB team bus as it left the team hotel for the stadium. The police announced, ‘There was an explosion in the Dortmund-Hochsten area’.”

European football’s governing body Uefa added: “This decision was made after a meeting held at the Westfalenstadion between Uefa, representatives of the two clubs and local authorities.”

Thanks for your patience and understanding and the "Dortmund! Dortmund" chants, dear supporters of @AS_Monaco_EN! pic.twitter.com/Gcz9XGQY0J

The local police force - Polizei Nordrhein-Westfalen Dortmund - then stated on Twitter: “We can confirm that there have been three explosions in the area of the BVB team bus.”

Monaco fans inside the stadium showed their support by chanting “Dortmund! Dortmund!” - a gesture appreciated by the German club.

“Thanks for your patience and understanding and the ‘Dortmund! Dortmund’ chants, dear supporters of AS_Monaco_EN!” they tweeted.

Bartra was taken to hospital after reportedly suffering minor injuries to his arm.

The 26-year-old joined from Barcelona last year, and his former employers were quick to wish him well.

The Spanish club said on Twitter: “All our support to MarcBartra, BVB and their fans.”

In the immediate aftermath of the explosions, Dortmund said there was “no cause for concern” for those at the stadium, and said the club were in close contact with the emergency services and Uefa.

Police Dortmund said in a statement: “In the run-up to the Champions League game between BVB (Dortmund) and AS Monaco, there was just after 1900 tonight an explosion close to the BVB team bus.”

The statement added: “According to what we currently know, the wheels of the bus (totally or partly) burst and one person was injured.

“It is not yet possible to say exactly what the explosion was or exactly where something exploded.”

Following the announcement that the match had been postponed, Police Dortmund tweeted: “To reassure stadium visitors and relatives: There are currently no indications of a threat to visitors in the stadium #bvbasm”

Dortmund’s chief executive, Hans-Joachim Watzke, said in a statement: “The team is in shock. We must get through this but it will not be easy for the players.

“Borussia Dortmund is especially strong in extreme situations. Everyone will come even closer together and I’m sure the team will feel this.”

He said Bartra’s arm and hand had been injured, and the injuries were “nothing life-threatening”.

Police Dortmund later issued another statement with more detail about the incidents, and said they would hold a joint press conference with the club later.

They said in a statement: “According to first findings, the police assumes this was an attack with serious explosives. The explosives may have been hidden in a hedge near a parking lot.”

Dortmund and German Football League president Reinhard Rauball said it would be a “bad thing” for the perpetrators to have any impact on the outcome of the quarter-final tie.

He said in a statement on the club’s website: “Of course this is an extremely difficult situation for the players. But they are professionals, and I am convinced that they will put this away and will produce a performance [on Wednesday].

“It would be a bad thing for those who did this to succeed because the team is influenced in some way.”

Police Dortmund praised fans for the way they dealt with developments, tweeting: “High praise to all stadium visitors! Without problems almost all left the stadium and are on the way home!”