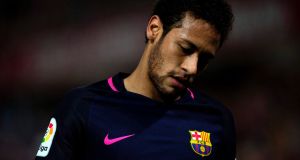 Neymar has been suspended for three matches and will miss the clasico against Real Madrid. Photo: Jorge Guerrero/Getty Images

Barcelona forward Neymar will miss the Clasico against Real Madrid later this month after being given a three-match ban following his red card at Malaga on Saturday.

The 25-year-old Brazil international picked up a needless second yellow card for wiping out Diego Llorente in the 65th minute of the 2-0 defeat at La Rosaleda, which earned him a one-match suspension.

But his sarcastic applause towards the officials after he was cautioned for a second time has resulted in an additional two-match ban, as it was deemed an infringement of article 117 of the RFEF’s disciplinary code.

The RFEF, Spanish football’s governing body, confirmed the sanctions on its website on Tuesday.

Article 117 addresses “attitudes of contempt or disregard for referees, managers or authorities”.

Neymar will miss this weekend’s home game against Real Sociedad, the April 23 trip to the Bernabeu, and the home clash with Osasuna three days later.

LaLiga leaders Real Madrid had earlier on Saturday been held to a 1-1 draw by city rivals Atletico, meaning Luis Enrique’s side could have moved top of the table with victory.

But Sandro netted on the break against his former club on 32 minutes and substitute Jony Rodriguez added a late second after Neymar’s dismissal, meaning Real finished the weekend three points clear of Barca and with a game in hand.